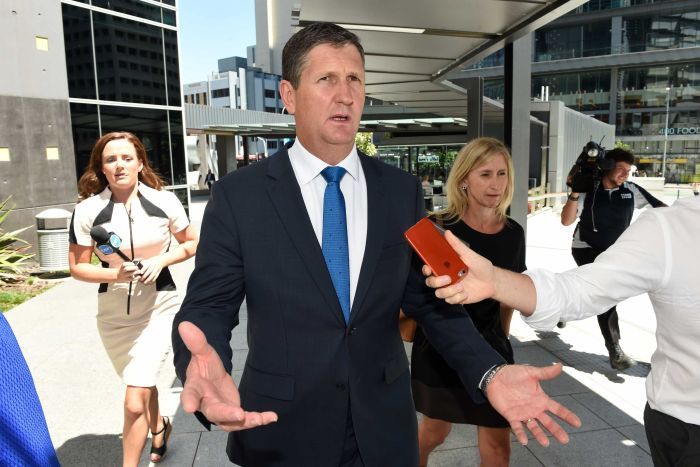 This morning, Mr Nicholls said he has been approached by colleagues, party members and supporters in the past few days to nominate.

"After careful consideration ... this morning I informed Lawrence that if the spill motion is successful tomorrow I will be putting my hat in the ring for leadership of the parliamentary party," Mr Nicholls said.

Thursday Evening : Official - BREAKING News : Queensland Opposition MP Tim Mander has resigned from the front bench and declared his intention to run for the leadership of the LNP.

A dark horse entry in to the field could be Fiona Simpson the State Member for Maroochydore.

Queensland Opposition Leader Lawrence Springborg is facing a leadership spill as the Liberal National Party struggles to capitalise on Labor's weaknesses in a hung parliament.

Mr Springborg's personal popularity has been waning, as the third-time opposition leader fends off the perception he is boring and unelectable.

Combined with the recent blindsiding by Labor on voting laws, which could have given the ALP an extra eight seats at the last election, his ability to negotiate support of Katter's Australian Party MPs in the hung parliament is being questioned.

Mr Springborg has called an impromptu partyroom meeting for Friday, where former deputy premier Jeff Seeney will move a motion at the meeting for leadership positions to be declared vacant.

It has been just 14 months since Mr Springborg was elected party leader, beating arch-conservative Tim Mander by just a few votes.

Photo: Mr Springborg and Mr Nicholls and Mr Mander, who will vie for the leadership. (ABC News)

In February there were rumblings of another challenge by Mr Mander, who holds the Brisbane seat of Everton by a wafer-thin margin, but no formal tilt emerged.

But, the gloves are off.

There could be as many as seven challengers, Griffith University political scientist Paul Williams says.

However, Nanango MP Ms Frecklington has reportedly been courted by Mr Mander and Mr Nicholls to be their deputy, in part to shore up the regional vote.

Dr Williams predicted Mr Nicholls to be the strongest contender, and would be able to overcome his handicap of being associated with the Newman government and asset lease baggage.

"He is high profile, holds a high-profile Brisbane seat — safer the Tim Mander's — he is also very good on the sound bite, and a more balanced and sober and thoughtful politician," Dr Williams said.

"He would push Palaszczuk and Labor to the brink.

"I think whoever it is, it's going to get up this time."

'Better to move now, than later'

Although the LNP has held it together since its humiliating defeat at last year's election, even pulling ahead in recent polls, Mr Springborg's personal popularity remains low.

Despite recent polls being encouraging for the LNP, Dr Williams said it was failing to exploit Labor's foibles.

First elected as MP for Carnarvon in 1989 at the age of 21, the youngest MP to be elected to the Queensland Parliament

Served as government Whip 1996-98, becoming Minister for Natural Resources from February to June 1998

In mid-2006, Mr Springborg and Liberal leader Bob Quinn announced a merger of the Liberal and National parties but this was rejected by the federal parties

Led the party to a third defeat in 2009 and resigned the leadership, instead becoming deputy leader to John-Paul Langbroek

Two ALP MPs defected last year and this year the Palaszczuk Government has been taunted for "keeping the wheels turning" rather than providing forward-thinking legislation.

"The LNP should be streets ahead," Dr Williams said.

"And it seems to me Springborg, in my mind, often picks on the wrong thing or uses the wrong rhetoric when attacking the right thing.

"That's why I think his party is exasperated with him."

Mr Springborg was elected to State Parliament 1989 as the Member for Southern Downs as a 21-year-old.

He was one of the better performers in the former Newman government, even though he had the difficult portfolio of health.

His shortcoming is translating that success into popularity amongst voters.

"Some of the feedback I get, is that they use words like boring, monotone voice, sounds like a whinger, hyper-critical in his sound bites on television, and the voice, which sounds a little drone-y," Dr Williams said.

"Springborg is, some people say, unelectable at least in terms of the south east, the south east won't vote for someone they still see as a farmer, they want to see an urban conservative.

"It is unlikely Springborg's stocks will improve.

"With what could be 18 months to an election, his colleagues are thinking better to move now, rather than later."