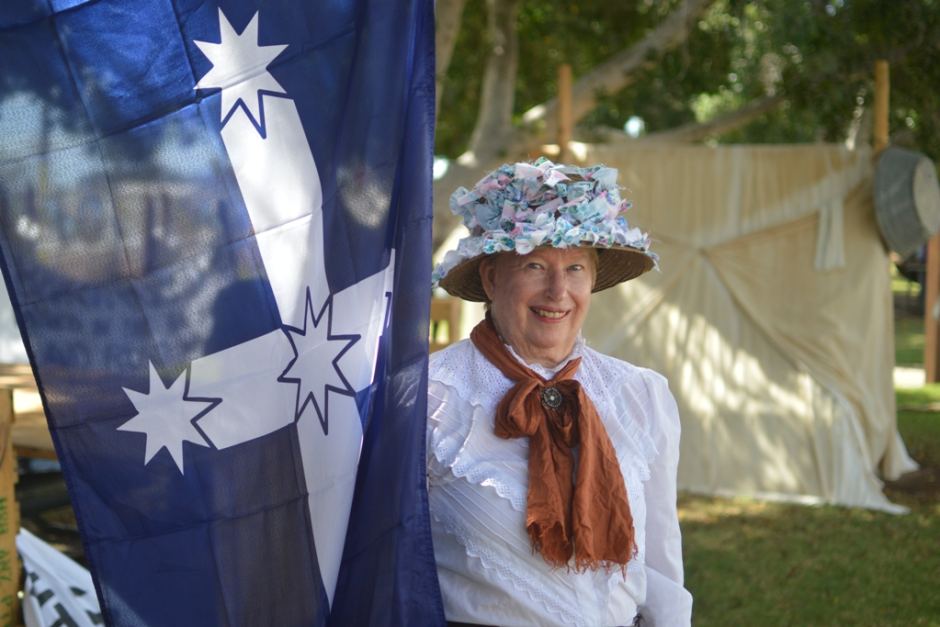 Thousands of tourists have descended on the outback Queensland town of Barcaldine to mark 125 years since the famous shearers' strikes of 1891.

The town is widely regarded to be the birthplace of the Australian Labor Party, with many of the strike leaders going on to hold public office.

Jaclyn Hine (Photo Above) is a descendent of one of the strike's leaders, her great-grandfather Edward Hartnett Murphy.

Ms Hine travelled more than 1,000 kilometres from Brisbane to Barcaldine for the annual Tree of Knowledge festival this weekend.

Although striking shearers may have been perceived as thuggish men, Ms Hine said that was not the case for her great-grandfather.

"I think it's important to remember that although a labourer, he had the potential for better things, which I don't think was ever realised in his life," Ms Hine said.

"He stood up for justice [and] equality — they were working for better wages and conditions for the men.

"It took a great toll on the family but he stood up to be counted and [I'm] very proud of that heritage."

Mr Murphy's friend and fellow strike leader, George Taylor, went on to serve in the West Australian Parliament as Speaker of the House and the world's first Labor Government was sworn into the Queensland Parliament on December 1, 1899.

Guns everywhere but no shots fired

One of the organisers of the festival, Sharon Broughton, said shearers like Mr Murphy would have faced a perfect storm of poor working conditions and low pay.

Living in sweltering tin sheds, with dirt floors, bunk beds, and few windows, they started to think that maybe they should be paid more.

During the strike, labour was brought in from Victoria, where workers were desperate after the gold rush ended.

The shearers retaliated, Ms Broughton said, and there were some incidents where the train track was tampered with, or there were other bids to slow or stop the trains.

In the early part of 1891, pastoralists appealed to the Government for support and the Premier at the time, Sir Samuel Griffith, duly sent in police and military personnel to protect the "blacklegs" and "scabs" who were brought in to make sure sheep were still shorn.

Unionist prisoners released from prison in Rockhampton in May 1891 after being jailed for causes arising out of the bush strike.

"[They sent] troops and artillery — there was even a Gatling gun," Ms Broughton said.

Despite both sides being armed, there was surprisingly little violence and no deaths that could be directly linked to conflict, Ms Broughton said.

"There were guns everywhere but it never happened so it was a very non-violent, in that sense, strike," she said.

"There was lots of jeering, yelling and pushing.

"There were some incidents where the people in the pubs locked themselves in because the unionists were marching up the street.

"But not a shot was fired."

Despite having a real passion for their cause, unfavourable weather conditions and a lack of funds to continue the strike meant that it ultimately fizzled out.

However, a political movement had begun and many of the leaders of the strikes went on to hold public office, despite most of the alleged conspirators having been sentenced to three years' imprisonment with hard labour on St Helena Island in Moreton Bay.

One of the ex-strikers became a Member of Parliament for Barcoo, which was the local electorate at that time.

Barcaldine Regional Council Mayor Rob Chandler said local shops, hotels and pubs would benefit from the influx of people for the annual Tree of Knowledge festival.

He said tourism was particularly important to the region during the current drought.

"At the moment, there's a lot of hurt out there in small business land and with our landholders," he said.