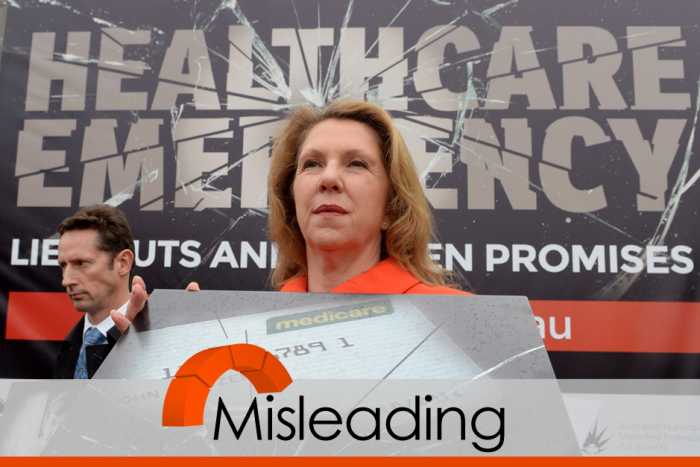 Federal Election 2016: Has the Government cut billions out of public hospitals?

Labor has used the second week of the election campaign to highlight the Government's record on health spending.

Opposition health spokeswoman Catherine King said the Liberals had been "a disaster when it comes to health".

"They have cut billions out of public hospitals," she told ABC radio.

Fact Check has previously explored this issue in checking a claim by Victorian Premier Daniel Andrews in April 2016 and a claim by Ms King in June 2014.

This verdict relies on the research contained in those fact checks.

Both claims related to Coalition's plans to change a funding arrangement proposed by the Gillard Labor government.

But the changes are not due to begin until July 2017 and it is far from certain that the Gillard promises would ever have been fulfilled because they were far into the future and never budgeted for.

Something cannot be taken away if it was never given in the first place.

In the meantime, Commonwealth spending on hospitals has been in line with Labor's arrangement to date, and is scheduled to increase until 2020 by up to 6.5 per cent a year.

Ms King's claim relates to changes to the formula for hospital funding increases announced in the Coalition's first budget in May 2014, to take effect from July 2017.

This policy changed a funding arrangement proposed by the Gillard Labor government, which had started in July 2014 and was to move to a more generous formula from July 2017.

Had the Gillard-era promises been kept, the states and territories might have received an additional $56 billion for hospitals for the period July 2017 to June 2025, according to an estimate produced by the Parliamentary Budget Office in February 2016.

Ms King first claimed the Coalition had cut billions from public hospitals after the Abbott Government's first budget in 2014.

Fact Check found her claim was conjecture because it was based on savings claimed by the Coalition against Labor's funding arrangements over 10 years, a period for which Labor had not made any plan to meet its own funding projections.

At the time, the Coalition had given no detail about its hospital funding plans beyond 2017.

Mr Andrews made a similar claim about public hospital funding in April 2016 when Prime Minister Malcolm Turnbull announced $2.9 billion in additional hospital funding over three years from July 2017, which Fact Check found to be exaggerated.

Victorian Premier Daniel Andrews claims the Federal Government has taken away billions of dollars of hospital funding and not put it back.

Mr Turnbull's announcement retained the Labor formula that has been used since July 2014, but imposed a cap on annual increases of 6.5 per cent from July 2017.

The corresponding figure in Labor's last full financial year in office, 2012-13, was $13 billion.

It remains impossible to determine whether Labor's hospital spending projections over 10 years would ever have been achieved.