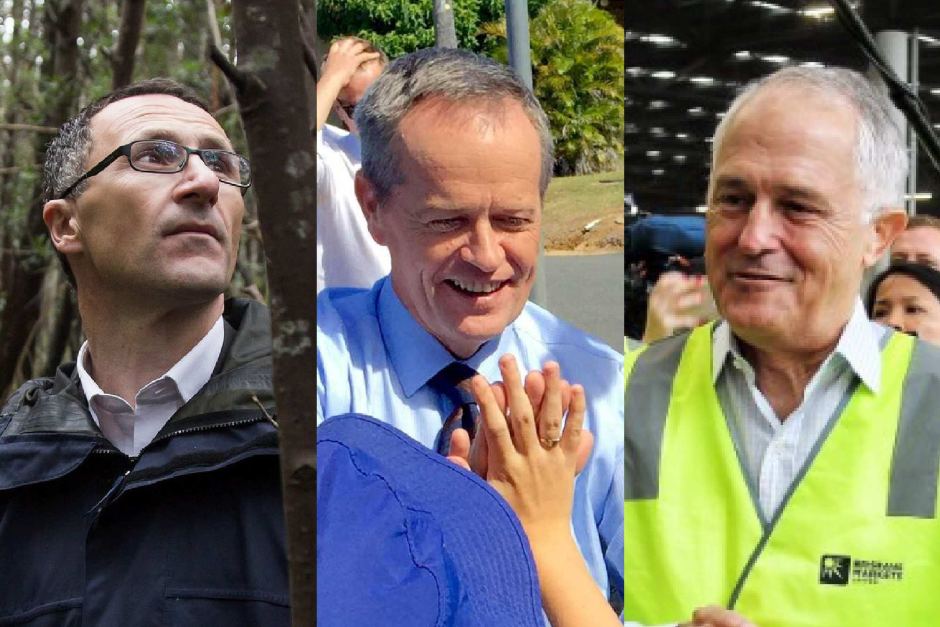 Federal Election 2016: What are our leaders really thinking about climate change?

Climate change, and the policies to slow its impact, have dominated the last few election cycles in Australia. But it has barely rated a mention at the start of this campaign.

Let's focus on the leaders of the two competing major parties and the Greens.

But we can look at what each of them have said on the issue, what their policy positions are, and how they have changed over time.

It may be pleasing to learn that both Mr Turnbull and Mr Shorten consider climate change a real phenomenon, caused by human activity.

In a 2010 speech from Mr Turnbull, then a humble opposition backbencher, he said that science shows "we have already exceeded the safe upper limit for atmospheric carbon dioxide".

"We are as humans conducting a massive science experiment with this planet," he said.

"It's the only planet we've got. We are dealing in scientific terms with enormous uncertainty.

"There is a tendency for people to point to the forecasts for the future, sea levels, temperatures, other impacts of climate change and say, 'oh well, they've over egged the pudding a little bit, it's probably going to be less dramatic than that'.

"But we are dealing with uncertainty and it may well be and indeed there is considerable evidence, that it may well be that many of these forecasts that we've become so used to, in fact err on the conservative side."

"It is an existential threat — a matter of survival. A violation of basic human safety and basic human rights," he said.

"The islands of the Pacific will be first affected, but no country is immune.

"Australia can benefit if we take action on climate change. Australia has a lot to lose if we do not.

"The global temperature is rising and human activity is the cause. The proof is irrefutable."

The regional impacts of climate change are also a key focus for Mr Di Natale.

This topic featured heavily in a foreign policy speech he delivered to the Lowy Institute this week.

"This isn't just about preserving our environment, or transforming our economy, but as the American defence force has said, it is about protecting our national security as well," he said.

"The impact of global warming is going to fundamentally change the character of our foreign relationships.

"The science is crystal clear - we have to keep global warming to below 2 degrees, preferably 1.5 degrees to avoid catastrophic climate change. And to get this done is going to require an unprecedented commitment.

"To fail on this front means unprecedented global and regional instability."

So on the science of climate change, one could argue there's little separating the leaders. So how does that translate into action?

What should Australia do?

Here's where the differences start to emerge.

While the major parties support global action committed to at the Paris talks, each has a strikingly different idea of what Australia's contribution should be, and how those emissions reductions should be achieved.

Mr Turnbull has agreed to continue Tony Abbott's target of reducing carbon emissions by up to 28 per cent by 2020, based on 2005 figures.

Mr Shorten's Labor Party has adopted far more ambitious figures — a 45 per cent reduction target by 2030, with an ambition to reach a "net zero" of emissions by 2050.

It's a similar story when it comes to renewable energy targets.

The Coalition has a target for 23.5 per cent of Australia's electricity to come from renewable sources by 2020, when the target will be reviewed.

Labor has already committed to a longer term target — of 50 per cent renewable energy by 2030.

The Opposition Leader has been arguing the case that Australia will not meet its global responsibility if it persists with the Coalition's climate targets.

"We are the 13th largest polluter in the world, with the highest emissions per person in the OECD. And despite Liberal government accounting chicanery, our domestic emissions are going up, not down," he told the Lowy Institute.

For his part, the Prime Minister argues increasing the emissions target would burden the economy, without necessarily reducing global emissions.

"For Australia to go out on its own and nearly double its target … would impose a huge cost on Australians and would abandon the leverage we have to get a stronger global response," he said.

You can read more about the competing policies of the Liberals, Labor and the Greens on their websites.

How will they achieve the targets?

This is where the fractious debate surrounding climate change gets really heated.

With Mr Turnbull as Opposition Leader, Australia came close to reaching a bipartisan consensus on an emissions trading scheme (ETS) as the most effective mechanism to reduce pollution.

But it wasn't to be. Mr Turnbull was rolled by Mr Abbott in a leadership contest, with Mr Turnbull's support for an ETS a key driver of discontent in the Coalition.

From the Opposition backbenches, Mr Turnbull didn't hold back when describing his successor's climate policy.

"The Liberal Party is currently led by people whose conviction on climate change is that it is "crap" and you don't need to do anything about it," he said.

"Any policy that is announced will simply be a con, an environmental fig leaf to cover a determination to do nothing."

The policy that was adopted, and later implemented by then prime minister Abbott — so called "Direct Action" — will see $2.55 billion in incentives paid to polluters to reduce their emissions.

Critics argue it will cost many billions more to be effective, because it doesn't cap the total amount of emissions.

Now, as Prime Minister, Mr Turnbull has a different take on its effectiveness.

He told reporters, "We have moved from ideology in the climate change debate, to one of practical negotiation and outcomes".

But the Liberal leader isn't the only one to negotiate a policy shift.

After supporting a temporarily fixed carbon tax in government, Labor is now promising not one, but two emissions trading schemes.

One would cover the electricity industry. Labor argues its design would allow the scheme to operate "without a significant impact on absolute price levels faced by consumers".

The other scheme would measure polluters' emissions against individually predetermined baselines.

The government would not set a price on carbon, but companies who exceed their pollution caps would be required to purchase domestic or international permits to offset any emissions beyond the baseline.

The Coalition counters that Labor's scheme would increase electricity prices and put an increased burden on everyday Australians.

The Greens are proposing a more dramatic approach — to stop any new or expanded coal or gas mines. Miners would also lose access to diesel fuel rebate.

The Greens are seeking to reintroduce a carbon price. But unlike the scheme adopted by the Gillard government, there would be no free permits.

Senator Di Natale says that means coal and gas exporters would have to pay the full cost of the greenhouse gases that leak from their mining operations.

The Greens also want to impose a $3 per tonne levy on coal exports, using the proceeds to help fund the transition to clean energy, prepare for natural disasters and to provide climate finance to developing nations.

With such shifting positions between, within and around the major parties, it's no wonder our curious Australian wants to know what our leaders really believe on climate change.