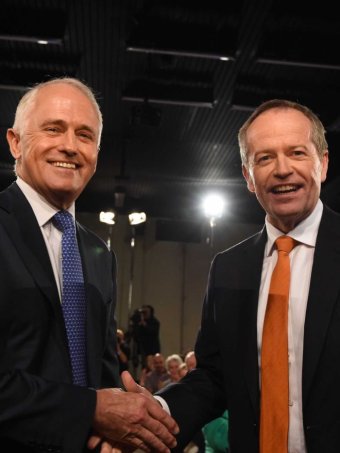 Prime Minister Malcolm Turnbull has used a leaders' debate in western Sydney to announce a deal with pathologists over a long-running bulk-billing funding dispute.

Mr Turnbull and Opposition Leader Bill Shorten faced off at the Windsor RSL on Friday night, with the questions from swinging voters dominated by multinational tax avoidance, education and the budget.

Mr Shorten defended his plan to curb negative gearing after a few barbs from the Prime Minister, denying it would lead to higher rent prices.

While speaking about the cost of healthcare, Mr Turnbull declared a breakthrough in the stoush over the bulk-billing incentives for blood tests.

Mr Turnbull said the Government had been able to reach an agreement following months of debate.

"Sussan Ley, our Health Minister, has reached agreement with the pathologists, Pathology Australia, and they will be continuing to bulk-bill," he said.

"So, the concern that has been expressed about patients who go to have their blood tests done and so forth, being charged extra, not being bulk-billed, that concern is gone."

Under the agreement, the Federal Government will get to keep its proposed cuts to bulk-billing incentives for pathology services.

A spokesman for Ms Ley said pathologists have agreed to absorb the cost of the changes and maintain the existing bulk-billing rates.

In return, the Coalition has promised to legislate to provide a level of protection for pathology companies over rent increases for collection centres.

In a statement, Ms Ley said the the changes would "address ambiguities and improve compliance regarding the charging of 'fair market value' rents for pathology collection centres by landlords."

The spokesman said Pathology Australia had agreed to stop its advertising campaign against the Federal Government.

The changes, first announced in December last year, would save the budget $650 million over four years.

The Federal Government argues the incentives were not effective because the level of bulk-billing in the pathology sector had not changed significantly in the past five years.

Mr Shorten had earlier expressed concerns about the proposed cuts, with concerns pathologists would pass on the additional costs, or refuse to bulk-bill altogether.

"I don't think making it more expensive to … get a blood test actually cures sick people," he said.

Mr Shorten used the town hall-style event to focus on his key message for the week: Labor's plans for education, which he said would ensure a fair go for all kids.

"If the government puts people first, nothing can hold us back," he said.

Under Labor's Gonski needs-based funding model, every student receives a base amount of funding, with extra allocated for students with special needs or from disadvantaged backgrounds

"What I won't do is stand here and tell you that money doesn't matter. Of course it matters," Mr Shorten said, adding his goal was for 95 per cent of children to graduate.

But Mr Turnbull said when it came to education, it was about more than money.

"What we need to be focusing on is not who spends the most money but which party will get the best outcomes … We are ensuring that we get better outcomes," he said.

Both leaders vowed to address the childcare costs facing families.

"Your concerns are our concern," Mr Turnbull assured the audience, while Mr Shorten said: "We understand that childcare affordability is a giant handbrake on people being able to return to work."

Negative gearing and deficits on the agenda

The debate also saw the political rivals trade blows on negative gearing, an issue that has dogged Labor's election campaign so far.

Mr Turnbull insisted Labor's plans would push up rent prices, but Mr Shorten retorted: "Even a crocodile wouldn't swallow that."

"I understand that Mr Turnbull has the backing of real estate agents, and why wouldn't the big real estate agent corporations oppose what we're doing? Their business model relies on taxpayer subsidies coming from all taxpayers," he said.

Both leaders were asked how they would crack down on multinational tax evasion.

Mr Turnbull declared "paying tax is not optional" and said thanks to the Government, Australia has "the toughest multinational tax laws of any OECD country".

Mr Shorten said Labor had championed tougher laws for multinationals, saying all companies should be paying their fair share of tax.

The night wrapped up with the billion-dollar question: when will the budget return to surplus?

Mr Shorten said it would be "reckless" to provide a date before he had seen the Government's final figures, but outlined a list of Coalition measures his government would axe to save money.

In response, the Prime Minister said in 2019-20 the budget would be $6 billion in the red, but said it was estimated to be in balance the following year.

He said only the Liberals had the "leadership and the discipline" to pay off the debt.

The official audience gave the debate to Mr Shorten, with 41 of the 100 voters saying they would be more likely to back him. Of the rest, 29 sided with Mr Turnbull and 29 remained undecided.