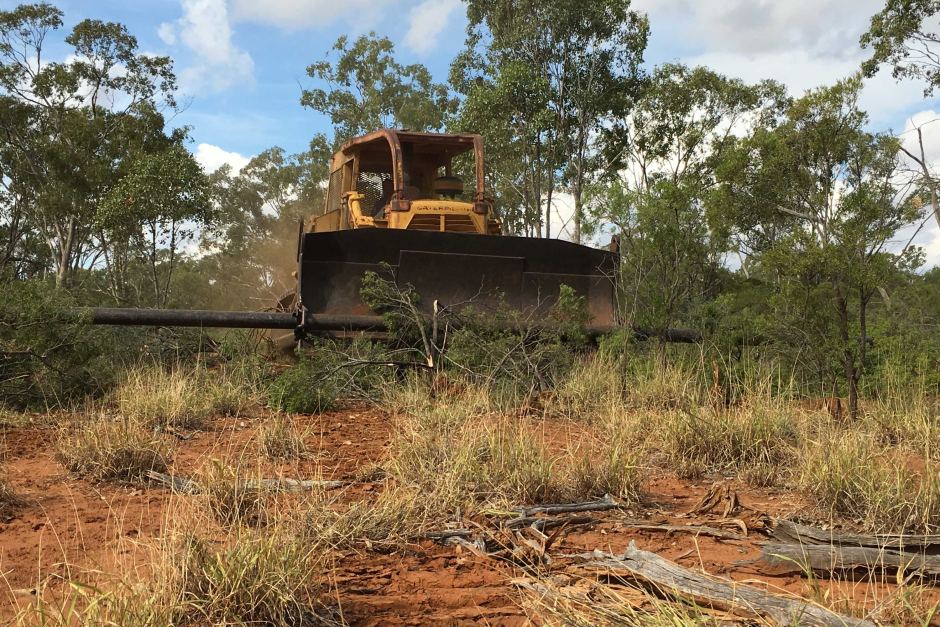 Federal Labor's push to clamp down on tree clearing has created backlash in farming communities in the key state of Queensland, putting the Opposition on a collision course with rural electorates.

As part of its new-look climate change policy, Labor has threatened to override state governments that fail to put the brakes on vegetation clearing.

Clearing involves bulldozing trees, or ripping them from the ground with a large metal chain, to make way for agriculture or development.

"I think you need to trust the people who are on the land and who have managed the land for many generations," Queensland grazier Nikki Cameron said.

"We probably feel like we're being left out of the conversation and it starts to become that they [Labor] are the baddies and it's us versus them."

Land clearing rates have tripled between 2009 and 2014 to almost 300,000 hectares of land being cleared in Queensland per year.

That figure is rising, following a weakening of the state's Vegetation Management Act by the former Newman government in 2013.

Policing tree clearing is a responsibility of the states, but Labor fears states like Queensland and New South Wales are failing to do this.

The Queensland Government said the state generated about 36 million tonnes of green house gas emissions per year by land clearing alone, and was responsible for 90 per cent of Australia's emissions from land use.

Land cleared in Qld since 2009

"There is now a national interest in ensuring our carbon pollution levels are managed and then reduced over time," Mr Butler said.

"Over the past few years we've seen carbon pollution levels from the land use, which covers tree clearing, increase 11 times as fast as every other sector of the economy.

"That is an unacceptable position for a country that is serious about reducing our carbon pollution levels."

"Most farmers are having enough trouble dealing with state vegetation laws. So [under a Labor government] you'll have state tree police and federal tree police," he said.

"Every time they flag a new legislation or new curb on tree clearing the tractors start up, and they shouldn't," he said.

"People borrow money to pull up trees that shouldn't be pulled because they think this is the last chance they're ever going to get to clear, and this has happened time and time again.

Queensland farmers have been in a standoff with the State Labor Government over tree clearing reform for the past 18 months.

The Queensland Government wants to reinstate strict native vegetation protections, but is struggling in a parliament where MPs from rural electorates hold the balance of power.

Basically improving the biodiversity of the country. You're providing extra grass, native grass, ground cover for runoff, and you're holding soil together."

Graziers Greg and Robyn Bryant, from Mitchell in southern Queensland, have argued tree clearing is sustainable and improves the biodiversity of farmland.

They invited Landline to their property as a way to challenge tree clearing critics.

"There's feral animals like rabbits in there which is not good for any environment, because they are an introduced pest. There's also feral pigs and wild dogs," Mr Bryant said.

"It is thick and overgrown, so what we're doing is basically improving the biodiversity of the country. You're providing extra grass, native grass, ground cover for runoff, and you're holding soil together."

The Bryants use a process known as "thinning", which enables them to bulldoze trees without a permit, provided they notify authorities first.

Landline understands since the state vegetation laws were changed in 2013, almost 1,400 farmers have cleared in this way.

Mr Bryant said thinning helped to "improve the soil for the bigger and more mature trees", allowing more grass to grow and attracting native birds to the farm.

But that notion is challenged by Greens senator Larissa Waters, who said clearing "worsens biodiversity outcomes, worsens the outcomes for soil and run-off that can travel to the Great Barrier Reef".

Mr Bryant has argued Labor's proposal to introduce national restrictions on tree clearing did not factor in improved biodiversity and was simply a "vote grab".

"It is the Greens that are pushing the issues, Labor's got to give in to them to win power," he said.

Mr Butler denied the policy was an attempt to secure Green preferences, as did Senator Waters.

"Those sorts of discussions don't happen, because preferences are up to the voter," Senator Waters said.

"But the Labor Party can see people are looking to the Greens for positive policies about the environment and fairness."

Labor is thought to be targeting 11 Coalition-held seats in Queensland this election, and four of them are rural, where tree clearing is an emotive issue.

"I think they need to find a different approach and then come back to Queensland and New South Wales and talk to country people."

Queensland Deputy Premier Jackie Trad said Labor was not "anti-farmer", and that introducing tighter clearing laws was not a barrier to the growth of the agriculture sector.

"Agriculture thrived under a decade of Labor's tree clearing laws, growing by more than $2 billion in sector profitability during that period," she said.

"This proves we can get the balance right between growing a thriving agricultural sector and protecting our environment."