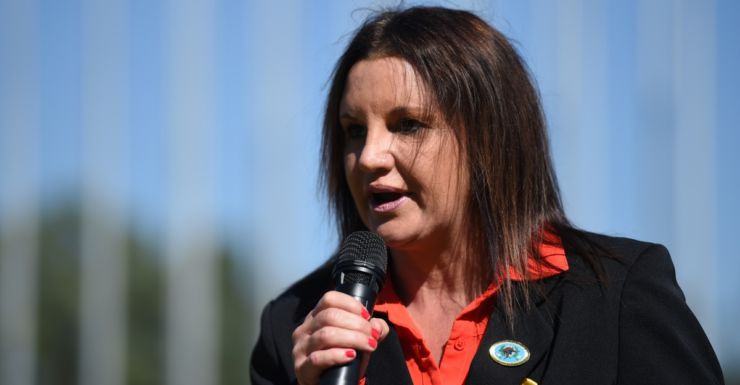 During Thursday night’s episode, Ms Lambie told of her fights with male soldiers during her Army days, and joked that she often considered “jumping out of my seat and going across the [Senate] floor”. This prompted host Annabel Crabb to ask who would be Lambie’s first “victim”.

“Yeah, he’s just an a***hole. Typical, ‘Hello, I’m born with a silver spoon up my rear end’. I really hate that sort of attitude.”

Senators Lambie and Bernardi recently clashed over the Coalition’s changes to Senate voting laws, which made it harder for independents to be elected.

Ms Crabb asked: “Did you get to make friends with Eric Abetz?”

Ms Lambie responded: “Yeah, no, Eric Abetz isn’t really a mate of mine.

“I just realised that, you know what – I’d served my country and I’d taken orders for 10-and-a-half years and I thought, ‘I’m not taking any more orders, especially from halfwits’.”

Her problem with Clive

While Ms Lambie described Mr Palmer as a “nice man” for helping her win a seat in the senate as a Palmer United Party member, she said his incompetence meant she had to leave the party to be an independent.

“By the time day three [in the Senate] came with Clive Palmer, I was nearly pulling my hair out,” she said.

“I thought, ‘Oh, my God’. You couldn’t suggest anything, you couldn’t get over the table.

“Everything was an effort to try and make him change his mind or just say … So, you know, within that first week, I learned how it was either his way or the highway.”

Ms Lambie also accused Mr Abbott of trying to strong-arm crossbench senators into “voting for his stuff” because he thought “we couldn’t think properly”.

During the informal interview – where the senator and Ms Crabb prepared and shared a meal – the Tasmanian also opened up about her “ratbag” childhood.

“I was pretty much a ratbag,” Ms Lambie said.

“[Playing sport] sort of kept me out of trouble there for a while.

“I didn’t actually wag any school until I got to Year 11, and then probably got into a really bad crowd then.”

She eventually did a gap year working in a bar in the Katherine in Western Australia.

She then joined the Army where she commenced basic training while pregnant.

She said her insistence on training during pregnancy blazed a trail for other women in Australia’s armed forces.