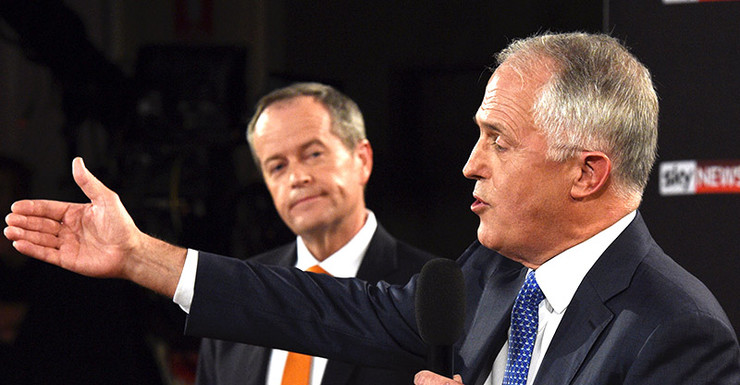 A peace deal with Tony Abbott should let the PM focus on a more present danger – ALP leader Bill Shorten.

The apparent reconciliation of Malcolm Turnbull and Tony Abbott will help to stabilise the Liberal Party’s voter base as the election campaign heads into week two.

Like the political troupers they are, the Prime Minister and the former prime minister will be staging a public get-together soon, raising the prospect of Mr Abbott’s return to cabinet if the Turnbull government is re-elected.

Having ‘sucked up’ his humiliation (with the help of the ‘traitorous’ Julie Bishop and Scott Morrison), Mr Abbott has publicly acknowledged that any Rudd-like return to the prime ministership by him would be delusional.

Mr Abbott says he accepts that the Liberal party room would never go back to him to re-take the leadership. So forever the partisan warrior, he is now urging his hardline supporters to turn to confront the real enemy: Bill Shorten’s Labor Party.

On Sunday, Mr Turnbull happily raised the prospect of kayaking across Sydney harbour to campaign with Mr Abbott at Manly in his safe seat of Warringah.

The May 9 Newspoll voter intention survey showed there was a 4.6 per cent swing to Labor.

If this pendulum was consistent across electorates, Labor would win 80 House of Representatives seats, up 25, to form a government in its own right.

This long, defensive campaign by the Coalition, without many big bang policy options left given the deficit and warnings about losing Australia’s AAA credit rating, is high risk. It requires scare campaigns and visual diversions.

Some of Mr Abbott’s lethal political skills appear to have been adopted by Mr Turnbull and Coalition leaders.

‘Stop the boats’, so devastating to Labor’s vote in suburban Australia, is now back on the agenda, with ALP candidates who have wavered and wobbled at the ‘inhumanity’ of incarcerating asylum seekers in Nauru and Manus Island being identified and ‘shamed’.

All are having to swallow their prior concerns and publicly assert they now abide by Labor’s policy of offshore detention and resettlement, anywhere but Australia.

Mr Shorten hoped that Labor’s tough policy would neutralise the issue. But in an election dynamic any evidence of back-sliding is politically exploitable.

‘Keep stopping the boats’ will now play out in hand-to-hand combat in those marginal seats where government incumbents can take advantage of it right up to July 2.

In trying to assert that Labor really does commit to stopping the boats with all the consequent distress over indefinite refugee detention this causes for Labor’s traditional supporters, Mr Shorten risks pushing them off to the Greens.

ABC psephologist Antony Green identified the Labor seats of Batman, Wills and Grayndler as where the Greens are applying the greatest pressure. ALP candidates in these seats can expect to be bullied into stating their support for Labor’s asylum seeker ‘inhumanity’.

They will all say it is morally justified by the greater imperative to stop people smuggling and drownings at sea, but those Australians distressed by the plight of refugees now in misery at Nauru and Manus can exercise their democratic rights accordingly.

In those seats where Labor polls less than 50 per cent of the primary vote, the Greens come second and the Liberals third, Liberal preferences directed to the Greens can push the Greens to victory.

The reconciliation of Malcolm Turnbull and Tony Abbott should work against the Coalition, with recalled memories of dark Abbott days horrifying electors.

But as we head into week two this must be receding as an influence. Mr Turnbull is reaching across the harbour to bury the hatchet with Mr Abbott, unified by one shared objective – Bill Shorten’s defeat.