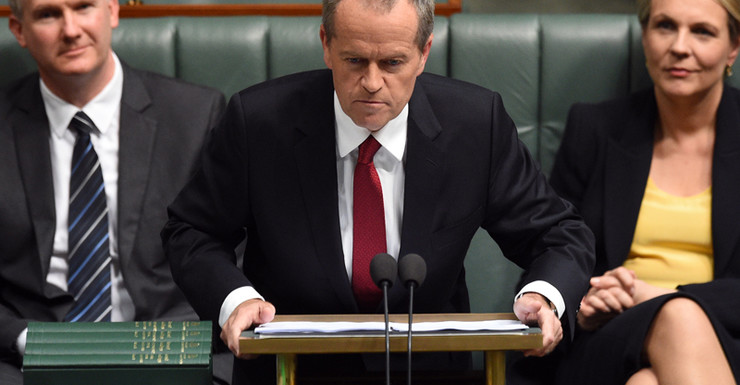 Opposition Leader claims to have found $71 billion in savings – and throws in a zinger.

Labor leader Bill Shorten has used his budget reply speech to launch a strident attack on the government’s economic agenda and establish the rules of engagement for the coming election campaign.

He framed his address around the Turnbull government’s latest attack on Labor’s complaints about Tuesday’s budget as an outbreak of “class warfare”.

“This Prime Minister has the audacity to accuse us of waging class war. It is not class war to disagree with cutting money from families on $50,000 to $60,000 in order to give millionaires a tax break,” he said.

“Now is not the time to reduce the marginal rate for individuals who earn greater than $180,000. According to the independent Parliamentary Budget Office, this decision is estimated to improve the budget by $16 billion over the decade.”

Mr Shorten said the government had chosen big business over battlers, had punished those who can’t afford it and rewarded those who don’t need it.

He attracted the loudest cheer from supporters packing the public galleries when he repeated his promise to speedily legislate for marriage equality. And he was rewarded with roars of laughter when he mocked Mr Turnbull’s seeming change of heart on climate change action.

“Advocating climate action is hard, and running a scare campaign against it is easy. Mr Turnbull should know – you’ve done both.”

There was some bipartisanship. The Opposition Leader supported the government’s modest measures to limit bracket creep and a tax cut for small businesses with a turnover of less than $2 million a year.

He said he was “flattered” the government had adopted many of his party’s policies, such as the increased tobacco excise, in the budget.

“Never has an Opposition had so many of its policies adopted by a government with so few.”

But in the face of continuing deficits, Mr Shorten said now was not the time to give the richest 3 per cent of Australians another tax cut. He identified $71 billion in budget savings, a move calculated to undermine Coalition attacks on Labor’s credentials as economic managers.

The Opposition Leader also made election commitments to:

• Retain indefinitely the 2 per cent budget repair levy for taxpayers earning over $180,000 – estimated to reap $16 billion over the next 10 years;
• Reject the 10-year plan to cut all company tax to 25 per cent – retaining an estimated $49 billion in tax revenue;
• Ensure its reforms to high wealth superannuation tax concessions would not be retrospectively applied;
• Create a $10 billion ‘concrete bank’ to co-invest with the private sector and superannuation funds in infrastructure projects;
• Allocate $37.3 billion over 10 years to implement Gonski education programs for disadvantaged students;
• Cap vocational education lans to $8000 per student to save $6 billion over 10 years;
• Repeal the Baby Bonus to save $1.4 billion;
• Scrap the government’s marriage equality plebiscite; and
• Re-direct revenues saves from negative gearing and capital gains tax reforms to new affordable housing.

Finance Minister Mathias Cormann criticised the budget reply as “all politics and no plan”.

“Bill Shorten had three years to get ready for tonight and all we got was another Labor push for higher taxes which hurt jobs and growth. What the Australian economy needs right now is a national economic plan for jobs and growth.”