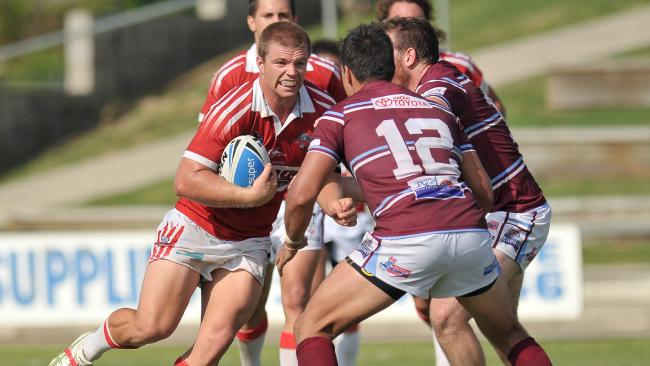 Two tragedies rocked the Intrust Super Cup competition last year and as fate would have it, the people most affected have come together this season at the Sunshine Coast Falcons.

The Falcons, who lost James Ackerman to injuries sustained in a tackle last June, have welcomed former Easts player Troy Giess, who lost his brother Grant to suicide last year.

Giess has helped Falcons players deal with their tragedy and they have helped him move through his.

This afternoon, a memorial in honour of James will be unveiled at Sunshine Coast Stadium and afterwards the Falcons play Redcliffe for the inaugural James Ackerman Memorial Cup.

Ackerman’s death in a tackle last year tragically took away a man who was a husband, father, son and brother, only two weeks after the death of Easts half Grant Giess.

At the end of the season, backrower Troy left the Tigers for the Falcons along with coach Craig Ingebrigtsen.

There could not be a more perfect environment to help them all deal with tragedy.

Ingebrigtsen said the players had found strength from their shared experiences.

“It is quite amazing that both experiences would combine at the one time and it is a good thing,’’ he said.

“The memorial is a great way to honour James. It is an important day for the club.

“I think the club has done really well to make this day and the memorial happen. It will be emotional for them I am sure.”

Ackerman played 54 Intrust Super Cup games for Redcliffe before joining the Sunshine Coast. He also had a stint in the Broncos under-20s team under Anthony Griffin.

Redcliffe are coming off a bye last weekend while the Falcons have won successive games and are far removed from the club that struggled to field a competitive team in recent seasons.

Halfback Ryley Jacks has been the star of the Sunshine Coast revival, scoring two tries in their upset win over PNG Hunters last week.

Rookie Redcliffe coach Adam Mogg has a much-improved team at his disposal and they put Wynnum Manly to the sword last time they played.

Broncos-contracted winger Tom Opacic has been playing out of his skin, scoring a hat-trick against Wynnum.