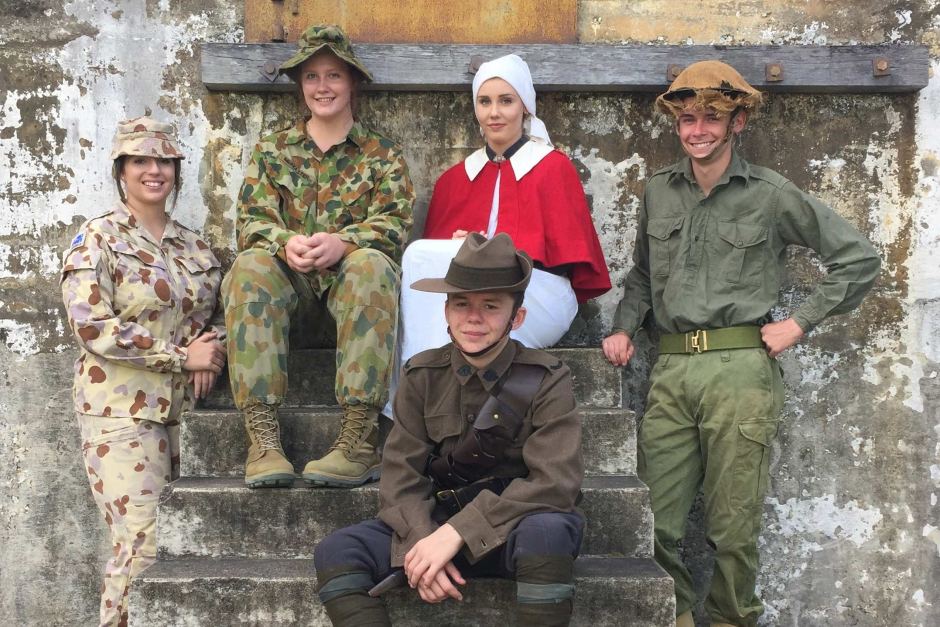 A group of Queensland teenagers has brought the ANZAC spirit to life as part of the RSL's centenary celebrations, being held at Fort Lytton in Brisbane.

To mark the occasion, the teenagers dressed in replica and authentic military uniforms, re-enacted battle scenes and gained a taste of life as an Australian Soldier.

Two of the teenagers who played soldiers in the re-enactment, Katie McKeaten and Rebecca Cooper, are both in the Air Force Cadets.

They said it was an honour to play soldiers, describing the ANZAC legacy as something close to their hearts.

For both girls, the Armed Forces is a way of life, with a strong family history of service to Australia.

"I can't imagine what he would have gone through, fighting for our country, because I've never done it," she said.

"It's really a special thing to be able to wear a uniform that represents the same organisation."

The teenagers said the re-enactment gave them an appreciation of what Australian soldiers in past conflicts have experienced.

Rebecca Cooper, 17, said she could not stop thinking about the soldiers who fought for their country.

"I had to sit for two hours in the sun whilst re-enacting, [that] was nothing in comparison to those who have fought wars for weeks, months, years, in the same uniforms that we were wearing today."

This colourful re-enactment helped launch RSL Queensland's ANZAC Appeal, which runs from April 1 through to April 25.

State Secretary of RSL Queensland, Scott Denner said the re-enactment gave the cadets an understanding of what it was like to be a teenager and fighting in a war.

"The young cadets who came along and dressed up in those period uniforms, it just gave them a greater ability to appreciate that people who were really their age, seventeen and eighteen year olds, certainly joined up in World War 1 and 2.

"It just gave them the ability to appreciate effectively what those kids would have gone through."