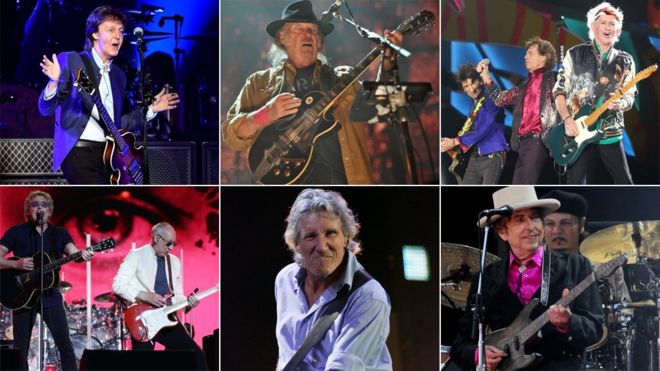 The Who's Roger Daltrey has confirmed reports of a rumoured "megafestival" expected to take place in the US in October, which will feature his band alongside Paul McCartney, Bob Dylan and Neil Young.

The line-up is also expected to include The Rolling Stones and Roger Waters of Pink Floyd.

"What a great weekend it will be," Daltrey told BBC 6 Music.

"They're all going to be there, on the one spot, at the one time."

The promoters of the annual Coachella festival, Goldenvoice Entertainment, are reported to be behind the festival.

The historic festival was initially reported by the Los Angeles Times over the weekend, but neither the acts nor the promoters had confirmed the event.

Daltrey confirmed on Wednesday it is expected to take place on the weekend of 7 - 9 October at the Empire Polo Field in Indio, California, where the Coachella Festival took place last weekend.

It will be the first, and possibly last, time the artists - all Rock and Roll Hall of Fame inductees - have shared the same bill.

The LA Times said Dylan and the Stones were expected to open the event with back-to-back performances on Friday, October 7, with McCartney and Young playing the following night, and The Who and Waters concluding the festival on October 9.

The announcement comes just after news spread around the world of pop icon Prince's death.

"We're the last of our generation.

"You can see from reading the obituaries lately that we [rock stars] don't make old bones very well, do we?"