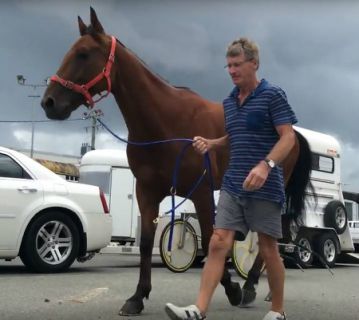 Queensland’s cult pacer Destreos will be paired with a new driver for his record-equaling 400th race start at Redcliffe Paceway on Saturday night, as the experienced harness racing driver Shane Graham takes the reins in place of the injured Kelli Dawson.

After 224 races paired with the 12-year-old gelding, including his last 34 starts, Dawson will be unable to take her customary place in the sulky this weekend after sustaining a fractured tailbone and rib injuries in a bad fall at Redcliffe last Wednesday.

However, in shades of the famous racing story about the relationship between the great Seabiscuit  and his regular jockey Red Pollard, Dawson has sets her sights on pushing through the pain barrier to make a fairytale comeback for Destreos’ record-breaking 401st start at Albion Park on Saturday, April 9.

“I was hopeful of driving this week but I think that might have been pushing it a bit,’’ admitted Dawson.

“I’m thinking I’ll be ok for next week. I won’t do much until then.

“The pain is bearable, it’s just a constant pain but I’m sure I could put up with it for five minutes.

“It’s a great achievement for the horse and it’s a shame I can’t be there this week but I’m sure Shane will look after him pretty well.

“Shane probably knows him nearly as well as we do just by watching him every week over the years.

“He’s pretty easy to drive, he has a few quirks but for I’m sure he’ll be fine.”

Destreos – the story of a 12-year-old marvel

Trainer Ken Rattray said it was an easy decision to partner Graham with his stable favourite.

“Shane was available and he’s one of the best drivers going around so you’ve got to go with the most experienced guy,” said Rattray.

“I really feel for Kelli, it’s really upset her but she’ll bounce back.

“I said to Shane if she’s ready next week, she’ll be back, but if he has to drive Destreos, he is available.”

Destreos fine-tuned for his landmark 400th start with a slick trial at Albion Park on Tuesday.

“He trialled well on Tuesday, a lot better than the week before,” said Rattray.

“I’m really, really happy with the way he trialled, he went a tick over 1 minute 54 seconds and driver Hayden Barnes said he was just jogging.

“He ran home his last half mile in 54.8 second which is pretty good time.

“He pulled up well and ate up afterwards, so all is on track, we’ve just got to get there on Saturday night now.”

To mark the significant milestone, the Redcliffe Paceway will make a special presentation to Rattray and owner Sally Stingel at the conclusion of the race.

With free entry to the track on Saturday night, Redcliffe Paceway President Bernie Ring is encouraging as many people as possible to share in this special milestone.

It will be a big weekend overall for the Redcliffe Paceway, with the club to also host its annual Redcliffe Yearling Sale on Sunday, April 3, where 98 lots will go under the hammer.