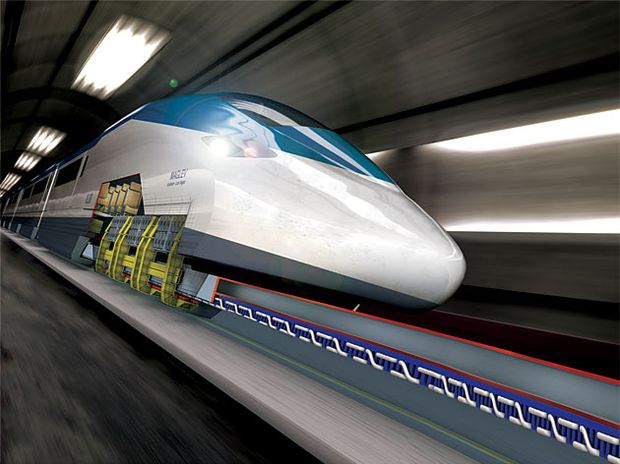 The prime minister is set to pledge a new funding approach to major infrastructure projects on the east coast, including a plan to develop high-speed rail links, ahead of a likely July election.

The government will promote 'value-capture financing', which leverages the increase in land value resulting from new transport links to contribute to its cost, The Australian reported on Monday.

The Australian reports the government will seek to use the financing to fund rail projects which would start with a line to the second Sydney airport at Badgerys Creek.

Lines could then be extended to regional centres such as Goulburn and eventually become part of a network running between Melbourne and Brisbane.

Another option under consideration is to levy a so-called betterment tax on property owners who would receive a substantial financial boost from the new transport infrastructure.

Opposition transport spokesman Anthony Albanese says the funding proposal is nothing new and the first thing Mr Turnbull could do was to back his private bill establishing the High-Speed Rail Authority.

T'he first thing Mr Turnbull could do towards the Melbourne-to-Brisbane link is to establish a High-Speed Rail Authority,' he said.

Mr Albanese, who already has a private member's bill before parliament to set up the authority, will be reintroducing his legislation next week.

'You actually need a structure that will work, to do the planning work, preserve the corridor,' he told ABC radio.

Projects needed to be built using both private investment and taxpayer dollars.

'Anyone who comes and tells you, you can do this for free, is fantasising,' he said.

Another option being considered by the Turnbull government is to levy a so-called betterment tax on property owners, who would receive a substantial financial boost from the new transport infrastructure.

Shadow treasurer Chris Bowen says the ideas are part of the conversation.

'If Mr Turnbull wants to put a concrete proposal on the table we'd be happy to look at it and work in a constructive fashion,' he told ABC

'This government doesn't have a great record when it comes to tax and taxation policy', she told Sky News.

Assistant Minister for Cities Angus Taylor said betterment taxes had been used in Hong Kong, London and in part for the Sydney Harbour Bridge.

'We are not commmitting to high speed rail down the east coast tomorrow because there is a lot of work to be done before that would ever come to fruition,' he told 3AW radio.

'We are saying this new approach will open new opportunities.'