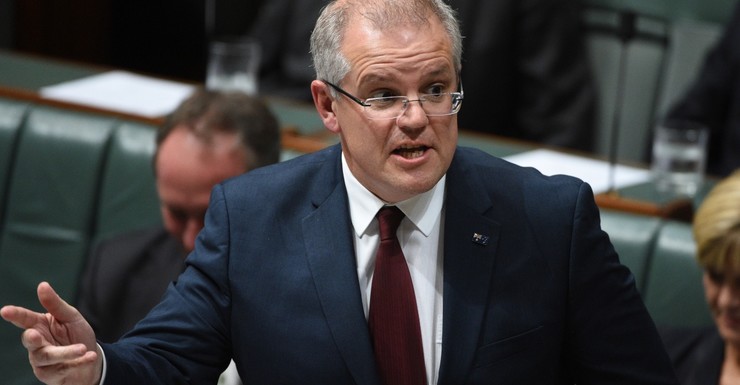 The Turnbull government has dusted off an old slogan a month out from the federal budget.

While 'living-within-our-means' signals a frugal affair, Treasurer Scott Morrison is still leaning towards cutting business taxes as he prepares for his first and only budget ahead of an election.

'We want to see the tax burden moderated for Australians and particularly for businesses that are out there employing people and driving the growth that we need to drive jobs,' Mr Morrison said on Monday.

Malcolm Turnbull argues the states can no longer credibly ask the federal government to raise the GST or Medicare levy after rejecting his offer to allow them to raise their own income tax.

The treasurer will release his much-touted tax package with the budget on May 3.

Asked whether the budget can afford a tax cut while calling for people to live within their means, Assistant Treasurer Kelly O'Dwyer told reporters in Melbourne the government was looking at ways to grow investment and the economy.

'So we are looking at the levers the government can pull in relation to that, and the taxation system is one such lever,' she said.

In contrast, Mr Morrison said all Opposition Leader Bill Shorten would say in the time between now and election day is that there will be higher taxes to pay for Labor spending commitments.

'Every time you see Bill Shorten's lips moving over the next three months ... your taxes will go up or the deficit will get bigger because that's the only way that he can afford to pay for anything and it is by increasing taxes,' the treasurer said.

But Mr Shorten insists Labor has unveiled 73 different policies, all funded and costed.

'We'll keep rolling out our well thought-out, positive plans for Australia's future while in the meantime we see the Liberals tearing themselves apart,' he told reporters in Perth.

Among Labor's plans are limiting the tax offset for property investors and halving the 50 per cent capital gains tax discount.

But the Greens have proposed to taking that further, phasing out the capital gains tax discount over five years which would generate $119.5 billion of savings over a decade.

That will run parallel with the minor party's already announced plan to phase out negative gearing to ease affordability pressures in the house market.

'We can't see any justification for any part of capital gains to be tax-free,' Greens deputy leader Scott Ludlam said.