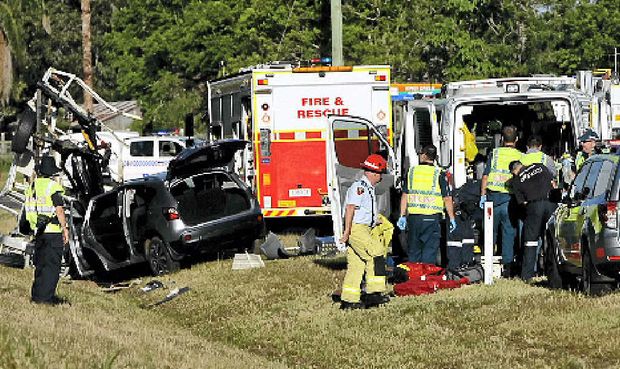 Mr Pitt said the NIIS — as a companion scheme to the National Disability Insurance Scheme — would cost an extra $32 per vehicle a year or about 60 cents a week to fill a gap in compulsory third-party vehicle insurance that currently left some catastrophically injured Queenslanders without the lifetime care they required.

The extra cost was $44 less than the figure estimated by the State Parliamentary Committee that had examined implementation of the NIIS in Queensland.

He said at present, because compulsory third-party (CTP) insurance was a fault-based scheme, those sustaining catastrophic injuries in road crashes were not covered if they were found to be at fault or if nobody was at fault.

“Right now, around half of the 140 people in Queensland who are catastrophically injured in motor vehicle accidents every year aren’t guaranteed the lifetime care they require,” Mr Pitt said.

“Often these Queenslanders have to rely on the support of family, friends and carers, not-for-profit groups, public health and welfare systems.

“This can lead to compromised care and support, poor recovery and a limited ability to re-engage with their community. Today’s Bill changes this.

Mr Pitt said in 2013 the former LNP Government signed a national Heads of Agreement with the Commonwealth Government committing Queensland to either implement a lifetime care and support scheme for motor vehicle accidents that met agreed minimum benchmarks, or be 100 per cent responsible for the costs of people who sustain catastrophic injuries from 1 July 2016.

But the former government did little to prepare for the Scheme’s introduction in the two years after signing the Heads of Agreement, leaving the Palaszczuk Government to act.

Mr Pitt said the National Injury Insurance Scheme in Queensland would operate as a “hybrid” model — incorporating a no-fault model while retaining an option for exercising common-law rights to recover the costs of treatment, care and support for those who were not “at fault” for their injuries.

He said the State Parliamentary Committee that had examined the NIIS discussed a cost of $76 per vehicle for a “hybrid” NIIS model.

“Today I can advise that we propose to implement an adjusted NIIS model at a net additional cost to CTP insurance of $32 per vehicle,” Mr Pitt said.

“This is a saving of $44 for every motorist from the original estimated cost.

“At this cost, the NIIS in Queensland will be the most affordable scheme introduced nationally.

“It is an affordable scheme that gets the balance right for motorists. For 60 cents per week extra, Queenslanders catastrophically injured will receive lifetime care.

“In order to seek further savings, it is proposed that the Palaszczuk Government will also undertake a CTP Scheme Review in time for 2017-18 premium setting.”

Mr Pitt said he urged the Opposition and all MPs to support the Bill because the NIIS was a scheme that should be above politics.