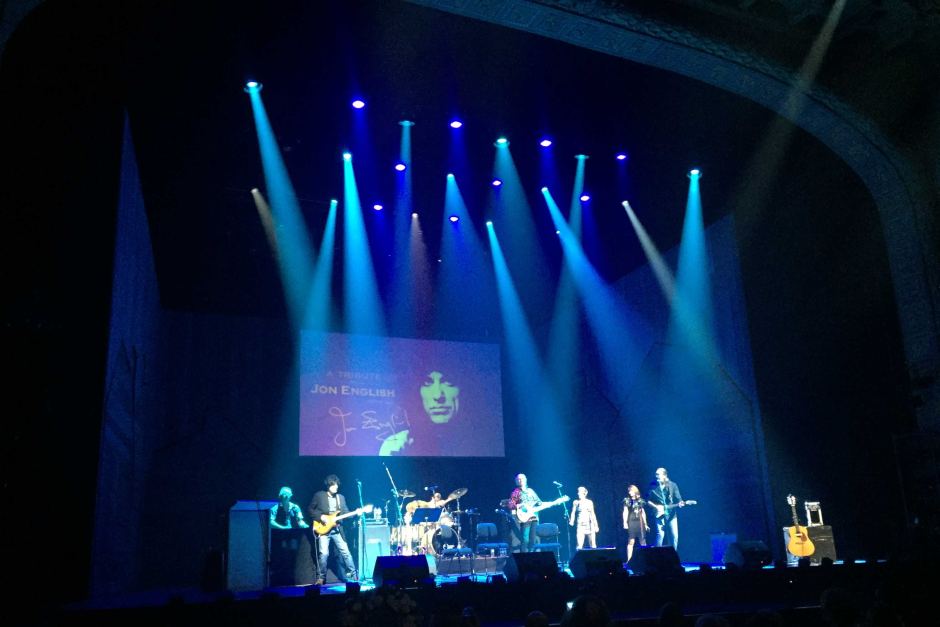 A memorial service is underway in Sydney to farewell Australian entertainer Jon English.

The 66-year-old singer, songwriter and actor died on March 10, following complications from what was supposed to be a routine operation.

Family, friends, musicians, actors and fans have packed the Capitol Theatre in Sydney's CBD for the public memorial service.

Photo: Sharon Fuller once laughed with English that she was stalking him. (ABC News: David Spicer)

Among the guests is long-time fan Sharon Fuller who saw him at the Capitol Theatre five times in Jesus Christ Superstar.

Cynthia Getchell-Rouse and Lizzy McSherry lined up before dawn to make sure they got the best seats at the memorial service.

"I have been a fan for 45 years," Ms Getchell-Rouse said.

"I loved his acting, singing and charisma. No other performer has done what he could do.

"Whenever I met him he has always cared about his fans."

"Wherever Jonno went, he was always the star," he told the memorial.

"He was a singer, a composer, an actor, a musician, a television star, he was a titan of the stage and of film.

"But remember, always a husband and a father, and whether I liked it or not, always captain of the ship."

Mr Rix described his days with English as the "glory days".

"He was so talented," he said, his voice breaking with emotion.

"He was so focused on his audience, so focused on the people that came to see him perform, that I found he could barely leave the stage without winning over every single audience member to the back row.

"I believe that's Jon's legacy and there's unlikely to be another performer with so many of the skills that Jon mastered, nor will there ever be anyone who has left such a profound archive of outstanding achievement."

Photo: Cynthia Getchell-Rouse (left) and Lizzy McSherry lined up before dawn to get the best seats in the house. (ABC News: David Spicer)

Trevor White, who starred alongside English in Jesus Christ Superstar, told the gathering they had met during "cattle call" auditions for the show and went on to become close friends.

"Who should I sit next to of all people but Jon English," he said.

"He was this enthusiastic gushing-with-excitement guy.

"Who would have known that after weeks and weeks of auditions around the country and several call backs, we would end up working together, opposite each other for over 2,000 performances.

"He used to spit all over me every night, eight times a week," he told the memorial, which erupted with laughter.

White described English as a "dream to work with".

"We have amazing memories, it was the beginning of a lot of careers, especially for Jon although he'd been singing with various bands," he said.

From Jesus Christ Superstar to Pirates of Penzance and All Together Now, Jon English's career ran the gamut from pub band singer to opera performer and sitcom star.

Pop royalty John Paul Young, who starred alongside English in the same musical and who performed at the memorial, said he was still coming to terms with the loss.

"Jon's death is still sinking in," he said.

"It makes you think about your own mortality."

The service opened with an instrumental dubbed the "Jon English medley" performed by the Foster Brothers who English had a band with during the 1980s.

A video was then played with the rock legend performing one of his best known hits, Hollywood Seven.