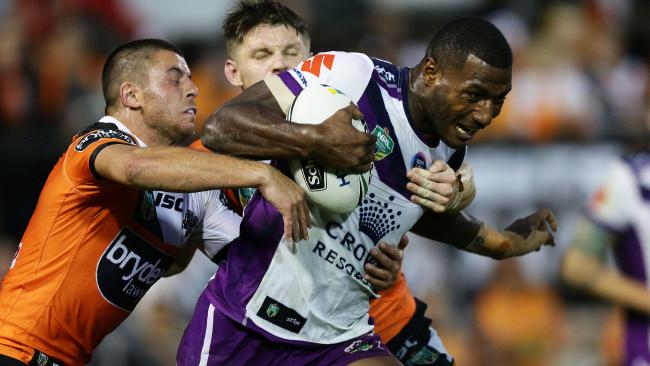 Intrust Super Cup: A battle for a top four position between Redcliffe and Easts headlines Round 8

The resurgence of the Redcliffe Dolphins will hit another challenge on Saturday when they face the shorthanded Easts Tigers with a top four spot on the line.

In our Intrust Super Cup Round 8 game of the week, the fourth-placed Dolphins will host the Tigers, who are sixth, at the Burpengary Sporting Complex.

Redcliffe continued to improvement under coach Adam Mogg with an away win over the Mackay Cutters last round while Easts, missing several key players through injury, fell to the Northern Pride in Cairns.

But Scott Sipple’s Tigers received a boost for this weekend with flyer Suliasi Vunivalu making his return to the side after scoring two tries in his NRL debut with the Melbourne Storm last week.

“Redcliffe will be a very tough team to go up against, if you look at their roster, they probably have the best team in the competition,” Sipple said.

“We’re going to need to improve our ball control if we have any chance of competing with them, especially away from home.

“That’s been the problem for us for a number of weeks now, you can’t have so many errors and expect to win games in this competition.”

Sipple said the return of Vunivalu was a major positive for his team.

“He’s been great with us this year and was obviously pretty good with the Storm last week, all the boys were very happy for him,” he said.

“That’s what we’re here for to help develop players to go onto the next step but if he comes back and plays for us, we’re excited to have him because he adds a lot to our football team.”

THE Souths Logan Magpies will be out to claim consecutive victories for the first time this season when they take on the CQ Capras in Yeppoon.

Although the match is a Magpies home game, the club has continued a recent tradition of taking the home fixture against CQ back to the region.

Souths Logan has been forced into two changes to the side with centre Scott Doyle (contrary conduct) suspended for two games and prop Herman Ese’ese called up to the Brisbane Broncos side to replace the injured Alex Glenn. Fellow Bronco Travis Waddell was cited for a grade one careless high tackle in last week’s win over Tweed Heads but escaped suspension.

Coach Josh Hannay said Tikiko Noke would replace Ese’ese while he was undecided on who would replace Doyle at centre. The 36-year-old was coy on whether Jonathan Kent would make his return to the side after previously making way for the in-form Luke Archer.

“Cameron Booth did really well at centre when Scott was out (through suspension) the other week but we’re just looking at some options and whether we leave Cameron on his wing where he’s done a great job,” Hannay said.

Jack Walters, Daniel Tamou, George Fai, Aotealofa Tuimavave, Dan Russell and Noke were initially named on an extended bench and Hannay said he would leave the other five to battle it out for the four interchange spots.

The hulking Ese’ese, who ran for 219m and scored a try last weekend, is a big loss for the Magpies, with Hannay aware of the need for his team to fix their poor starts this season.

However, the Magpies have proven they can come back from an early deficit, with a 24-4 second half sparking them to a 28-10 win over the Seagulls at the weekend.

A THREE-GAME losing streak has cast doubts over the Jets’ quest for back-to-back premierships but co-coaches Ben and Shane Walker have stuck solid with the side that fell 30-22 to Wynnum Manly in Round 7.

Marmin Barba faces a long stint in the sidelines after breaking his leg in the first minute of the clash with the Seagulls, with Josh Robinson taking his place on the left wing in the only change to the Jets’ 17-man squad.

Ipswich will be desperate for two points against Sunshine Coast to stay within touching distance of the top six, with five points already separating the defending premiers from the playoff positions.

Carlin Anderson now shapes as the Jets’ danger man in the absence of Barba after scoring a try and running for 114m in the loss to the Wynnum Manly.

Coming off a game-high 158m against the Seagulls, prop Billy McConnachie will again be tasked with leading Ipswich’s forwards.

Sunshine Coast has some problems of its own after copping a 40-10 hiding from Townsville, but the Falcons are still just one point adrift of sixth-placed Easts.