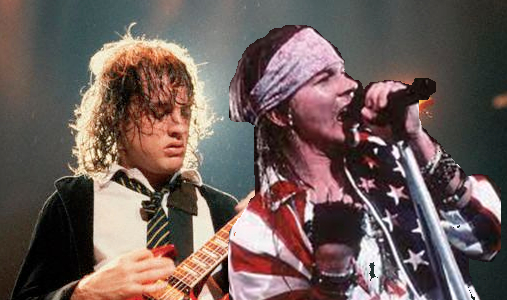 Rock News : Axl Rose Joining AC/DC Is Reportedly ‘All But A Done Deal’

Atlanta Radio 100.5 DJ Jason Bailey reported yesterday on his show, as transcribed by Alternative Nation, that a ‘very very good source’ is telling him that Axl Rose will indeed be joining AC/DC to front the band for the remainder of their tour. Alternative Nation first reported rumors of Rose touring with AC/DC on Monday.

“This is what I’m being told, Axl was meeting with the AC/DC group, because it’s all but a done deal that Axl will front AC/DC for the 10 remaining shows. All 10, including Atlanta.”

“From what I was told, this was all kind of new inside information to me, Angus is a very black and white guy. He’s like, Brian, for health reasons, can’t continue fronting the band. He was supposed to retire after the last tour, so they wanted to continue going out on the road and continue making music, so if you can’t do it, we appreciate your services, but the show must go on. They’re in town, they were auditioning people for the job, and then they flew Axl in, again, this is from my source.”

Axl Rose was spotted in Atlanta over the weekend, and according to MSL from GNRTruth, he was there for rehearsals, but not for Guns N’ Roses. While MSL’s tease on GNRTruth doesn’t specify what exactly Rose is rehearsing for, it has led to rampant speculation that the legendary Guns N’ Roses frontman could be one of AC/DC’s guest singers for their upcoming concerts.

AC/DC released the following statement earlier this month: “AC/DC are postponing the remaining dates of their U.S. tour because of lead singer Brian Johnson’s possible hearing loss. The band says in a statement that doctors have advised the ‘Back in Black’ singer to stop touring immediately or risk total hearing loss. The group’s shows beginning Thursday in Atlanta through April 4 in New York are being rescheduled for later in the year — likely with a guest vocalist. The group’s lone stop in Florida would have been Friday at the BB&T Center in Fort Lauderdale. AC/DC opened the most recent U.S. leg of its ‘Rock or Bust’ tour Feb. 2 in Tacoma, Washington.”