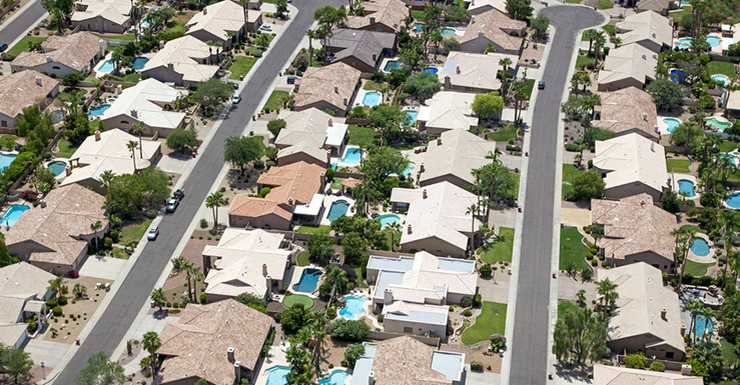 Debates about a house price crash or banking meltdown are missing the point. All the forces are aligned to inflict years on pain on our most highly leveraged households.

The latest update on house prices from the Australian Bureau of Statistics will spark yet more conversation on whether the bubble is bursting, or whether the banks’ mortgage books are about to fall apart.

Those are important debates, but they are beside the point for many Australian families.

What we should be asking is, whose lives will be wrecked if the highest household debt in Australian history runs up against falling house prices, and stagnant or falling wages?

These are not hypothetical questions: the ABS data released last Tuesday shows dwelling prices nationwide virtually flat in the December quarter (up 0.2 per cent), and ‘bubble city’ Sydney falling 1.6 per cent.

As the chart below shows clearly, in previous December quarters price growth has been strong in Sydney. That is, this change can’t be dismissed as a ‘weak time of year’, and the same pattern is seen in the nationwide figures.

Whether or not those price declines accelerate, Reserve Bank governor Glenn Stevens is confident that the banking system is robust enough to cope.

In a speech last Tuesday he said: “Banks have lifted capital resources, strengthened liquidity and reduced use of short-term wholesale funding. So their ability to handle either a funding market shock or an economic downturn has improved compared with the situation in 2008.”

That doesn’t mean that hundreds of thousands of lower-income households will be equally robust.

Their first problem will be more out-of-cycle interest rate rises. The RBA still has 200 basis points that it can cut, inflation willing, but the banks are expected to pass on only around half of any cuts due to a tightening of their off-shore funding sources.

And although the Australian Prudential Regulatory Authority (APRA) has been asking banks to factor in 200 basis points of interest-rate increases when lending to new customers, the customers themselves may not have made this calculation.

One lending manager told The New Daily that “completely unorganised” borrowers would be hard hit, even if their incomes are relatively good. He described households with numerous maxed-out credit cards, a personal loan for last year’s holiday, a leased car, and a “locked-in” lifestyle of eating out, good clothes and expensive entertainment.

While it may be difficult to feel sorry for families living the ‘mass-affluence’ lifestyle, the lending manager said they will not be able to change their ways if interest rates bite.

They may not be the poorest, but having relied on equity withdrawal to paper over the financial cracks for years, they will be helpless in the face of flat or falling house prices (no more equity withdrawal to enable debt consolidation) combined with out-of-cycle interest rate hikes.

The other big factor in determining mortgage stress is wages. While we’ve become accustomed to ‘flat’ pay increases, the number of hours worked is just as important as your hourly rate.

As covered previously, ‘hours worked’ has shown a positive tick up recently. That, however, is no cause for complacency.

Brendan Rynne, KPMG’s chief economist in Australia, noted earlier this month that capital expenditure, which underpins job creation, is set to take a dive in 2017 – and only half of that will be in the mining sector.

In a briefing paper he wrote: “Australia’s level of capex is currently holding up quite well in this financial year … [but] people should not assume [this] figure will last long … the situation will change dramatically next year, with capex slipping to levels last seen pre-GFC. FY17’s expected much lower capex figure is a huge concern for Australia’s economy, as it will filter through to reduced investment activity levels and hence lower GDP.”

If that forecast is accurate, the pull-back will be reflected in the number of hours Australians are working, meaning under-employment, or straight unemployment will push over-leveraged households into financial stress.