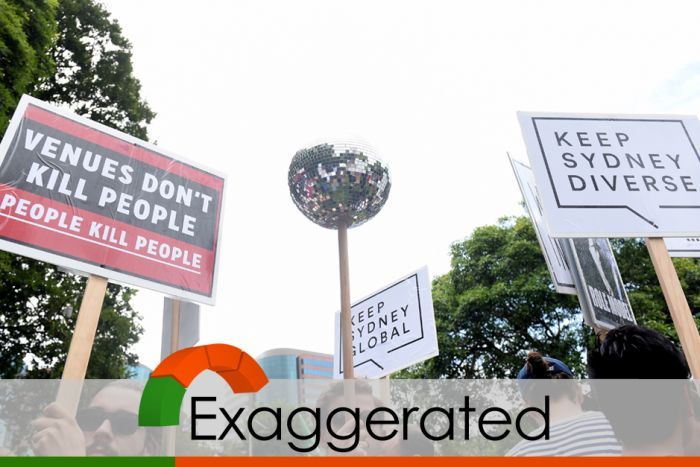 In February 2014 the NSW Government introduced measures, usually referred to as "lockout laws", to tackle night-time violence in the Sydney CBD.

In February 2016, the Queensland Government brought in similar measures.

Advocacy group Keep Sydney Open is opposed to what it says are "simplistic, band-aid measures" and held a rally in Sydney on February 21, 2016.

The following day, its campaign manager Tyson Koh asserted that no cities similar to Sydney had lockout laws in place.

"Why does Sydney have these lockouts when no other international city worth its salt has these lockouts?" Mr Koh asked on Sydney breakfast radio on February 22.

The same day he said on Channel 7's Sunrise program: "No one has been able to answer the question why Sydney needs lockouts when no other city which has the same amount of people in terms of population, the same cultural diversity - why they don't have lockouts. A city like Melbourne, a city like New York..."

Is there a lack of laws similar to Sydney's lockout laws in comparable international cities? ABC Fact Check investigates

Fact Check has assessed the claim on the basis that the phrase "lockout laws" refers to the full suite of measures introduced by the NSW Government.

The claim is exaggerated.

It is correct that "last entry" times are not in place in major cities outside Australia.

However, the 3:00am last drinks time is not unusual: many major cities around the world impose a mandatory last drinks or closing time, often earlier than Sydney's and close to the 1.30am last entry time.

The 10:00pm blanket closing time for NSW liquor stores is stricter than the rules in place in many other cities, but again is not unheard of in other major cities.

The NSW "lockout laws" are in place in an area of Sydney designated as the "CBD Entertainment Precinct".

The last entry and last drinks restrictions do not apply to small bars (less than 60 patrons), restaurants, tourist hotels or The Star casino.

Photo: Sydney's lockout laws were introduced in 2014, in response to a perceived spike in violent incidents in Kings Cross and the CBD. (702 ABC Sydney: John Donegan)

Tyson Koh tells Fact Check that Keep Sydney Open "believes that the entire suite of liquor licensing restrictions needs a forensic review with certain areas to the policy being redesigned from the ground up".

"This includes a complete scrapping of the 1:30am lockout, 3:00am ceasing of service [to be] applied on a venue-by-venue basis, the exemptions for the casino to be investigated, the removal of the 10:00pm takeaway sale cut-off with applications only to problem rural areas [and] the lifting of the freeze on new licenses and extensions," he says.

Prohibiting entry or re-entry to venues after a certain time is used in Australian cities outside of Sydney.

Starting in March 2008, there have been mandatory last entry and closing times in the Newcastle CBD, currently 1.30am and 3.30am respectively.

Melbourne held a three-month trial of a 2:00am last entry time (but with no last drinks time) in June 2008, but it did not continue beyond that period.

In 2013, the South Australian government imposed a last entry time of 3:00am on venues in Adelaide (but with no last drinks time) which still applies.

Photo: Advocacy group Keep Sydney Open has been vocally opposed to the suite of measures referred to as the 'lockout laws' in Sydney. (Keep Sydney Open)

But examples of last entry times in big cities outside Australia are hard to find.

Some areas of New Zealand impose or have considered such measures, which they call a 'One Way Door Policy'.

A last entry time is not in force in Auckland, New Zealand's largest city, despite calls by local police for one to be introduced.

Cities and towns in Scotland have had various types of last entry restrictions — Glasgow, Scotland's biggest city and a major nightlife centre, introduced a 12:00am last entry time (called a "curfew") in 1993.

But Ione Campsie, a spokesman for Glasgow City Council tells Fact Check that the "12 midnight curfew for entry to Glasgow nightclubs is now very much consigned to history", having been discontinued around 12 years ago.

Last entry times are not in place in the major US or Canadian cities.

Fact Check cannot say with certainty that last entry times are not in place somewhere in the US, given that liquor licensing laws in the US vary by state and county (some of which are "dry counties" that prohibit the sale of alcohol at any time).

However, Andrew Plunk of the Eastern Virginia Medical School, who researches alcohol policies, tells Fact Check that he is "not aware of [US] cities that lock out new patrons after a certain time".

Fact Check also spoke with Katharine Graham, Senior Scientist at the Centre for Addiction and Mental Health at Western University, Ontario Canada, who indicated that last entry times are not used in Canada.

Dr Plunk tells Fact Check "having a 'last call' after which alcohol cannot be served is standard in the US."

"All of the top US cities by population have these policies, although the specific time that service stops varies," he says.

Dr Plunk suggests that "2:00am is likely the average time for last call across all of the US", although there are outliers such as New Orleans, Miami, Las Vegas and New York City (where last drinks is at 4:00am).

The Alcohol Beverages Control Commission of Massachusetts tells Fact Check that the state Liquor Control Act prohibits the sale of alcohol between 2:00am and 8:00am in the city of Boston and throughout the state.

The "Last Drinks Coalition", an Australian group that supports the Sydney lockout laws, points to 2:00am closing times in force throughout the US state of California and some North American cities including Ottawa and Toronto.

This Facebook post from NSW Premier Mike Baird on the lockout laws attracted over 17,000 comments, most of them negative, and was followed by a protest in the Sydney CBD attended by tens of thousands of people.

Keep Sydney Open's Mr Koh acknowledges the 2:00am close in California, but suggests to Fact Check that "there is a significant culture of all-night parties in residential areas [and] a rampant culture of illegal parties in non-licensed premises that serve alcohol".

Mr Koh also says that the Canadian city of Vancouver has been able "to curb the identified issues with violence within their entertainment precinct, without a curfew".

However, Gerald Thomas, Director of Alcohol and Gambling Policy at the British Columbia Ministry of Health, informs Fact Check that there is 3:00am last drinks in Vancouver, which is "similar to the lockouts policies in Australia".

In Cape Town, South Africa, apart from the airport and special exceptions, standard closing time for venues in commercial areas is 2:00am, although applications can be made for extended trading hours up to 4:00am.

Bars in residential and "mixed use" areas of Cape Town have to close as early as 11:00pm.

In London, there is no specified last drinks or closing time, however "early morning alcohol restriction orders" can be made by local councils, requiring 3:00am last drinks.

A spokesman for the City Council of Manchester, the United Kingdom's second largest city, tells Fact Check that there is no city-wide last drinks or closing time.

However, there are special licensing rules for "Withington stress area" (a small part of the city with a large student population), requiring newly licensed venues to close by 11:30pm.

Of course, there are many other cities — ranging from Berlin to Hong Kong — where licensed premises can operate 24 hours a day.

However, the fact remains that Sydney is not alone in having a last drinks time.

One of the more controversial aspects of the NSW Government's measures is the across-the-board mandated 10:00pm closure of all liquor stores throughout the state.

Comparing this restriction to those in place in other countries is difficult, given that some countries allow certain types of alcohol to be sold in convenience stores, supermarkets and other outlets.

Scotland has a similar restriction to NSW: alcohol only be bought between the hours of 10:00am and 10:00pm, although it is on sale in both liquor stores and supermarkets.

Opening and closing times in England and Wales for liquor stores and supermarkets differ depending on the licence conditions for a particular premises, but some supermarkets do sell alcohol 24 hours a day

Like other forms of licensing, in the United States, liquor store opening times vary by state, and usually by county. For example:

The rules in Canada also differ by province: