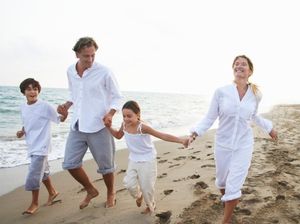 Research revealed today by NAB and MLC says Australians tend to think they're worse off than they actually are.

The research reveals Australians are confused by their social standing, with 66 per cent of people labelling their class as either middle or lower middle, and almost one-in-two Australians saying they are living 'pay-cheque to pay-cheque'.

The research, which involved surveying more than 2,000 Australians, reveals Australians have a striking perception problem when it comes to their personal socio-economic standing and that of others.

The Australia Today whitepaper lifts the lid on how Australians are living their financial and social lives. The report shows that Australians are confused by their social standing, with 66 per cent of people labelling their class as either middle or lower middle, when in fact only 20 per cent of Australians actually fit into this category.

The report found that 40 per cent of Australians actually fit into either the upper class or upper middle class categories, when benchmarked against a range of factors including income, occupation, employment and home occupancy.

The research suggests the confusion lies in the perceived difference between 'lifestyle' and 'standard of living', with 75% of respondents agreeing that having a comfortable lifestyle means 'having enough money to do what I want, when I want.'

Higher income earners with a household income of $200,000 or more per annum were more likely to underestimate their financial position, with 44 per cent rating themselves as middle class.

Half (46 per cent) of Australians say they are living 'pay-cheque to pay-cheque', including one in five of those with a household income of more than $200,000 annually.

Nearly half of those surveyed told us that living comfortably requires at least $150,000, and an overwhelming majority say that being worth $1,000,000 does not make you rich in Australia today.

When asked to describe the lifestyle of a typical middle class Australian, many said that the pre-requisites are having a professional job, owning a house and car and being able to send their children to private school. With the average household income of the middle class sitting at $77,676 per annum, there is a clear disconnect between the definition of 'lifestyle' and 'standard of living.'

This research also tells us that many Australians are looking to Government for the answers, with nearly half of those surveyed believing the government should do more to help middle-class families.

Andrew Hagger, NAB Wealth Group Executive, and MLC CEO, today released this as the first of a three-part whitepaper commissioned by MLC to help better inform debate on Superannuation.

"At the end of the day, helping more Australians to save for their retirement should be a national priority," Mr Hagger said.

"When more Australians fund their own retirement, we win on two fronts - we improve our quality of life, and reduce the budgetary burden of an ageing population for future generations.

"But, in order to have a well-informed national conversation about our super system, we need to understand how Australians identify themselves and discover their aspirations..