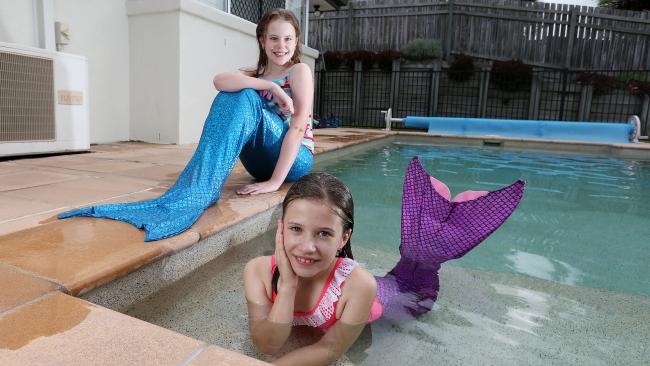 Mermaids  have been locked out of public pools.

The ban on one of 2015’s most popular Christmas presents comes after warnings from organisations such as Life Saving Queensland, Australian Council for Teaching Swimming and Water Safety and the Australian Consumers’ Association.

The mermaid look is achieved by a monofin shaped like a fish tail, which encases both feet.

The fin is often used with a hip-to-ankle sheath that binds the legs together.

A Moreton Bay Regional Council spokesman said the tails were not permitted at public swimming facilities.

“The decision follows advice about the potential risk of drowning, particularly in younger swimmers,” he said.

“Similar mermaid tail exclusions have been adopted interstate and internationally.”

Australian Crawl general manager Sue Mayo said most patrons had been supportive of the ban at her Caboolture facility, even though she knew of no recorded drownings caused by the devices.

“It’s a nightmare waiting to happen,” Ms Mayo said of the risk.

“(The mermaid devices) put the body into a position where you can’t easily stand up. When children learn to swim they have to counterbalance their body in the water by opening their legs wide while standing.

So if they can’t achieve that counterbalancing effect, they can’t keep their head out of the water and they can’t catch their breath.”

It means there are going to be some sad mermaids in the Byrne family, from Eatons Hill.

Mum Kate said Santa had given her 11-year-old and eight-year-old girls monofins in 2014 and mermaid leg sheaths last Christmas.

“They were bursting with excitement when my two oldest girls discovered that Santa had granted their Christmas wish,” Mrs Byrne said.

“I completely understand the duty of care and potential liability cases that can arise at public swimming pools.

“However, I don’t believe that using the tails places my girls in any unnecessary or unacceptable risk.”