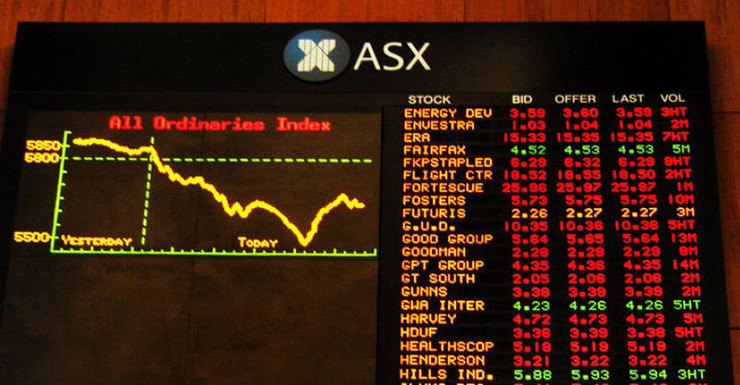 The danger with the current period of market volatility and share sell-offs is that there is no single cause and there are a multitude of risks.

Since the global financial crisis exploded in 2008, the world has lurched from crisis to crisis with periods of strong share and asset price growth in between the periodic sell-offs.

In late 2008 to early 2009, many serious analysts and policymakers were worried the financial world as it was known was going to end.

Unprecedented financial-sector bailouts, fiscal stimulus and interest rates — as well as a vital commitment by the G20 not to engage in protectionist trade policies — prevented catastrophe.

However, the legacy of some of those bailouts in already indebted European countries sparked the European sovereign debt crisis, which started with small players like Ireland and then Greece and Portugal, but threatened to engulf Italy and Spain.

Periodic eruptions of this crisis caused moderate global sell-offs along the way but, more recently, traders outside the countries immediately affected have begun to believe the damage of a default in Greece could be contained.

Then there have been a couple of US debt and budget crises along the way, triggering partial US Government shutdowns and the threat of a sovereign default if Congress did not raise the legislated debt ceiling.

Those fears hit fever pitch in August 2011 when Standard & Poor's delivered the US Government its first sovereign credit rating downgrade, from AAA to AA+, sparking a massive share market sell-off.

Then in June, July and August last year, a massive Chinese share bubble burst, sparking periodic sell-offs in markets around the world.

This time is different ... and worse

While the world has been a more volatile place since the great share boom peaked in 2007 and collapsed in 2008, the past five or six weeks of volatility is much more scary.

Even though the VIX index — which measures volatility, or basically how scared the market is — is not even as high as it was in August last year, it is much more consistently volatile, the fear is just not subsiding.

That is because this time is different, rather than one crisis focus-point, there are many.

China's woes are no monkey business

The Chinese share collapse of last year has yet to run its full course, largely because authorities close the markets or otherwise limit selling every time the falls start to panic officials.

This merely delays the natural market process of finding a bottom where willing buyers start returning.

Added to this, China now has a currency crisis due to its slowing economy and its citizens' desire to ship as much money out of a leaking ship as they can.

The latest estimates put China's foreign exchange reserves at $US3.23 trillion, which sounds like a lot, but authorities are burning through about $US100 billion a month trying to prop up the yuan against a capital exodus and speculators.

For an economy of China's size, reserves much below $US3 trillion would leave it dangerously exposed, which has many traders convinced a large one-off yuan devaluation is coming.

This currency uncertainty is not helping the nation's financial stability, and this is the country that is still — at least on its official numbers — providing the biggest support to world economic growth.

While Chinese jitters got the 2016 market turmoil rolling, it is arguably the Japanese central bank that has pushed the ball along into February.

The problem with a currency war is that no-one ends up winning from competitive devaluations.

The Bank of Japan's governor Haruhiko Kuroda no doubt thought he was doing the right thing for Japanese exporters and its still moribund economy by slashing certain interest rates below zero (yes, as in Europe, banks now have to pay the BoJ to put some of their money there).

However, all he seems to have done is spark the latest round in a global currency war.

Remember, China is trying to manage a gentle decline in its yuan, the European Central Bank boss Mario Draghi has spent the past few years doing "whatever it takes" to blast some competitiveness into the eurozone by lowering its currency and the US Federal Reserve is worried about the effect the rising greenback has been having on its still fragile economy.

Even Australia's Reserve Bank would be a little worried about the Australian dollar's stubborn resistance at 70 US cents, although the local currency has fallen against the euro, pound and yen.

The problem with a currency war is that no-one ends up winning from competitive devaluations — their rivals simply call their hand and perhaps raise.

In the meantime, markets and businesses are left with the uncertainty of wildly fluctuating currencies.

The big difference between the previous discrete bouts of market turmoil and this one is the slow grind lower of commodity prices since their post-GFC peak in 2011.

This is related to the Chinese economic slowdown (the other big difference between now and the previous crises) and has accelerated over the past 18 months.

The Bloomberg commodity price index is now more than 25 per cent below its GFC trough, explaining why companies like BHP have now smashed through their financial crisis lows.

The effects of falling commodity prices have been amplified by the large debts taken on by many commodity producers which took advantage of low rates after the GFC to cater for what was (wrongly) assumed to be a long-term China boom.

What has been left is oversupply in global market of stagnant demand, leading to prices that barely cover the cost of production (in fact do not for many higher-cost producers) and debts that are increasingly difficult to service, many of which will probably not be repaid.

This in turn is leading to fears of a banking crisis, with the Bank for International Settlements estimating that the energy sector currently carries around $US3 trillion of debt.

And a few more things

If those are not enough reasons for investors to be selling, here are a few more.

Greece's share market plunged nearly 8 per cent overnight and its Government 10-year bond yields jumped 6.4 per cent on fears about its next bailout review — yes, the Greek debt crisis lives on.

Even bigger than the fear of a Grexit is now the worry of a Brexit — Britain voting to leave the eurozone.

That vote is likely to take place this year, and a yes result would see a fair degree of financial crisis in Europe, as well as in London, which is actually still the financial capital of the world (even though the New York is a much bigger equity market, London is still the world's largest currency and commodity trading hub).

There are still US sovereign debt concerns, and an election that could still yet deliver an anti-Wall Street Democrat or Donald Trump to the White House.

While there are concerns about Chinese growth, other emerging markets are in far worse predicaments, including recessions in commodity-producing nations such as Brazil and Russia, which could also lead to significant debt defaults.

Back home in Australia, the biggest domestic problems related to the commodity crunch (see above), the impending closure of an auto industry that employs tens of thousands, the peak of a building boom and housing bubble, topped off by record levels of household debt and relatively low but rapidly escalating government debts.

It is quite possible that the world will muddle through these problems as it has the previous post-GFC crises, but markets are increasingly pricing in the risk that this time will be different, and that is why shares have been falling and may have someway more to go.