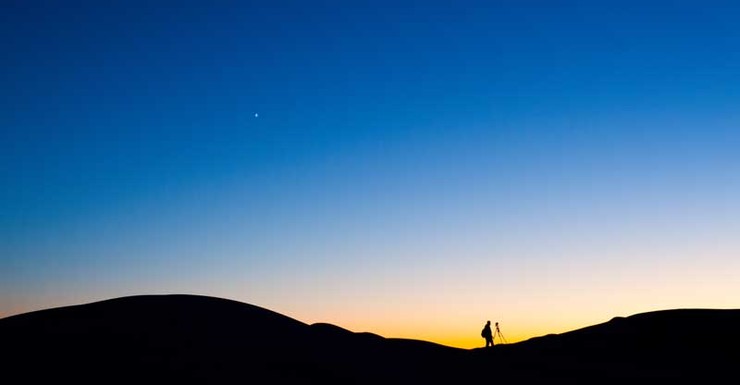 The event will allow the average earthling to see Mercury, Venus, Mars, Jupiter and Saturn from Earth.

Space enthusiasts won’t need the latest in telescopic technology to view a rare planetary alignment currently lighting up the sky.

Five of the brightest planets in the night sky – Mercury, Venus, Mars, Jupiter and Saturn – have aligned for the first time since 2005.

The best part is, it is one of the few astronomical events visible to the naked eye.

Swinburne University research fellow and astrophysicist Dr Alan Duffy said the best time to see the spectacle was between 5.30am and 5.40am, between January 20 and February 20.

“For the next month people will be able to catch the five visible planets all stretching out in this beautiful diagonal line across the early morning sky,” he told The New Daily.

“For the next week in particular, you can look to where the sun is about to rise in the east, guide up with your hand straight to where the moon will be sitting and along that line you will see five points of light.

“It is one of the few events in the night sky that you don’t need an expensive telescope to see, you get to enjoy this alignment.”

Some will be relatively easy to see, particularly the bright planets, Venus – which is surrounded by clouds of acid that reflect light – and Jupiter.

To see Mars, look for a reddish glow in the early morning sky, while Saturn will be surrounded by a golden tinge.

Mercury, however, will be more elusive.

“The hardest one [to see] is why this is quite special, which is Mercury, which is usually very close to the sun, so you will have to have some very sharp eyes and get up, unfortunately, pretty early – about 5.30am – to catch that,” Dr Duffy said.

“That one is going to be very low on the horizon, so you want to make sure you have not got any trees or, in particular, buildings between you and that eastern horizon.”

A location away from city lights is the best place to view the rare event, although the brighter planets, Venus and Jupiter, will likely be visible in areas with light pollution.

The last time this event was visible was in 2005 but, luckily, if you miss the early morning showing this time around, you won’t have to wait a decade to see it again.

“You will have a chance to see this again later in the year, in August, in the evening this time, which is a little bit nicer, but that is your last chance until 2018,” Dr Duffy said.

“It takes, in the case of Jupiter over a dozen years, versus Mercury which whips around in a couple of Earth months, but it is a reminder that purely by chance you will end up on the same side of the sun.

“It is something that our ancestors would have known incredibly well and be very familiar with, but something we have lost thanks to city lights.”

Scientifically, the planetary alignment would not advance current knowledge, but that wouldn’t stop even the professionals enjoying it.

“Just because there is no scientific value doesn’t mean we won’t be eagerly looking at it with our telescopes, it is just a rare chance to see five planets in one sighting,” Dr Duffy said.