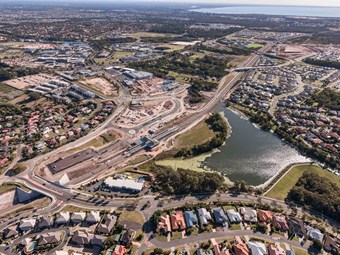 New rail line still has no name for it

A new station at Mango Hill and others along the brand new 14km Morton Bay Rail Link between Kippa-Ring and Brisbane are almost complete, with power switched on and safety testing starting this week.

The Moreton Bay community is a step closer to receiving train services for the first time, with the line and stations that will also connect with local bus services expected to become operational from the middle of this year.

"This is an exciting time for the project and means the new rail line, which has been eagerly awaited for the past 100 years, will soon become a reality," deputy prime minister and federal minister for infrastructure and regional development Warren Truss says.

Energising the rail line is a significant milestone for the $988 million project which is jointly funded by the Australian Government ($583 million), Queensland Government ($300 million) and Moreton Bay Regional Council ($105 million) and has taken almost three years to build.

"The new Moreton Bay Rail Line is the region’s biggest infrastructure project in more than a generation and has supported 800 jobs during construction," she says.

"The electrification of the rail line is a critical milestone and brings the key public transport project a step closer to completion."

"Queensland Rail and the project team will be monitoring the track infrastructure and signalling equipment and undertaking speed testing to ensure trains are operating safely and efficiently along the new line," he says.

"Once opened, the rail line will revolutionise public transport in the Moreton Bay Region, delivering more than 650 train services between Kippa-Ring and Brisbane each week."

At this stage there remains still no name for this new rail line.