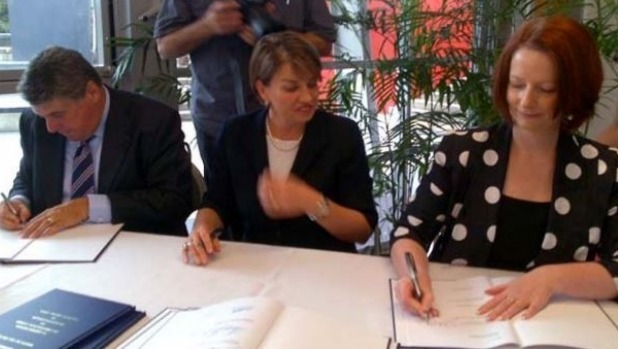 It has been 100 years in the making but passengers will finally be able to catch a train from the Redcliffe Peninsula to the heart of Brisbane within six months.

A photograph taken on December 3, 2010, shows where this final successful attempt started five years ago. The federal government agreed to contribute $742 million, the Queensland Government $300 million and Moreton Bay Regional Council $105 million to the project.

That night, Ms Gillard attended a community cabinet meeting in Petrie and Labor's then-MP for Petrie Yvette D'Ath had been able to announce the deal with the three levels of government, meaning the rail line would go ahead.

And now, just over five years later, all governments have abided by the 2010 promises.

"A project like this, that will see 600 new trains go from the Redcliffe Peninsula to the city CBD every week, is a fantastic initiative for workers in this area," Ms Trad said.

New Transport Minister Stirling Hinchliffe said trains with passengers should be running by midyear and definitely by the Ekka in August.

"Certainly it is still our intention to have the stations open and the trains operating and people enjoying the benefits of the Moreton Bay Rail Link by the middle of 2016," Mr Hinchliffe said.

"At this stage I'm pretty confident that then we will have them coming back to Kippa-Ring train station with their showbags in hand."

The six stations are either complete or almost complete, and for the past six months the local communities have been helping design car parks linked to the stations.

More than 350 koalas have been shifted as bushland was cleared and were being reintroduced to the remaining bushland in the nearby areas.

Four trains will be tested daily on the tracks as the electrification commissioning progresses.

But Wednesday's announcement that 25,000 volts of electricity was running through the overhead electrical wires came with a safety warning from Moreton Region's mayor Allan Sutherland.

"Mums and dads, keep your kids away from the stations," Cr Sutherland said.

"They are live from today. This is a real working station. The only thing missing is the people," he said.

"So mums and dads, if you hear your kids say, 'We're going to go down and play at the station', the answer is 'No, this is a live station.' "

The Moreton Bay Rail Link from Petrie to Kippa-Ring includes:

Over 80 per cent of people in the region (83 per cent) use a private car drive to work each day.