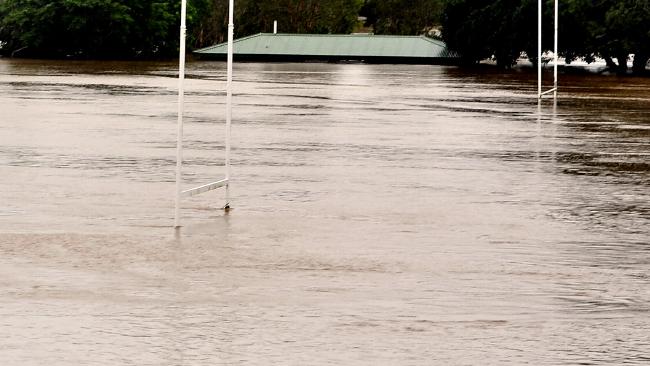 Sticky silt, debris, a wheelie bin on a footy crossbar and “good size” fish in a velodrome — these are the lasting memories from the 2011 floods which inundated Centenary Lakes Sports Complex.

It was just one of many disaster zones in the region after the January 11 deluge, but it brought out the best in people as they gave their time to help our community groups.

Caboolture BMX Club still has a line marked on a trackside tower and vice-president Chris Hoy said the club “basically had to start from scratch” after the disaster.

“Basically the whole track was covered. We lost a lot of records and paperwork. We nearly lost everything,” he said.

The machinery shed was also a casualty but the club was lucky enough to be back up to speed thanks to donations of time and equipment.

While members were always aware they were in a flood-prone location, the 2011 disaster caused some positive change which has helped in the many times the Caboolture River has burst its banks since.

The club switched the track surface to a harder crusher-dust compound which has stopped the track and jumps “washing away” as they did under a record flood peak of 10.94m in 2011.

“We know in advance we need to rally the troops. If we have to, we put the call out. You try everything to minimise the damage,” he said.

Caboolture Little Athletics member Bernadette Lowrie said social media had been a great way to make people aware of the help required — an aspect which has only strengthened since.

“That’s’ the good thing about Facebook and social media now you can just put it up and people will come,” she said.

Caboolture Junior Rugby League Club coach Ray Totoro, who was centre manager for little athletics at the time, said many “had no association with the club at all” but still helped.

“Once the water goes it’s the debris that’s left that’s the problem. It’s the used needles you’ve got to look out for most of the time,” he said.

“All I remember is walking through water and getting stuff out ... the fridges were floating through the canteen but they were still on.

‘There had been worse floods but you’d have to live here all your life to know it.”

The weirdest discovery was the fish found swimming in the velodrome.

“They were good size too. You’d catch them any day of the week,” Mr Totoro said.

This summer the Bureau of Meteorology is predicting a 50-55 per cent chance of above median rainfall in January, increasing to 60-65 per cent on average across the first three months of the year.

This is largely due to uncertainty over how quickly the recent El Niño, which brought below median rainfall to most parts of the country in 2015, will deteriorate.

But it is still expected to be a hot one, with the Bureau predicting at 75-80 per cent chance of exceeding the median maximum temperature between January and March.