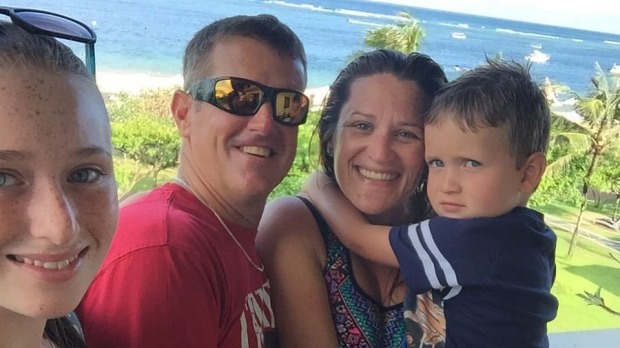 A Caboolture family, who realised they weren't "promised forever", have packed up their lives to embark on a year-long exploration of Australia, and themselves.

Tammy Roche, 36, and her husband Mark, 44, first got the idea to spend a year travelling with their two children, Zoe, 13 and younger son Kolton, 4, after talking to a couple who were travelling around Australia in 2013.

This is about creating experiences for our family, and the experiences are worth much more than any sort of thing you could buy

"I said to Mark, 'if you found out you had six months to live and you think back to this moment and you say well, would I wish I had have done it, you would have," Mrs Roche said.

"People put things off and say 'one day I'll get there'. I said now is the time to do it if we can."

That talk between the Roches started the 14-month process of purchasing a caravan, selling, giving away or throwing out almost everything they owned, planning schooling for their children and saving as much money as they could.

"I don't know why we kept so much junk. If you had have walked into our house you would not have thought we were hoarders, it wasn't the case," Mrs Roche said.

The family plans to use savings and income from Mr Roche's concreting company to keep them going for the next 12 months, with tenants to lease out their Caboolture property for a 12-month period.

Ms Roche said she received a lot of criticism at the start from friends and family who she thought would have supported them.

"It is their fears and their limitations they were putting on us. They were just trying to protect us," she said.

"They just didn't want our security taken from us but we were like 'no, actually our security is our family and that is what we are counting on at the moment'.

"When people say to us 'I could never do that', I get them because we never thought that at the beginning either.

"Our business has done well because of hard work but we are an average family, we are not someone that has gotten a trust fund or won the lottery, this year has been the hardest year we have ever had.

"We thought 'are we going to be able to pull this off?' But it is almost like everything fell into place. Yes, we worked hard but it was almost like as soon as you knew what you wanted, everything just started happening."

Ms Roche said she wanted her family to have a chance to experience life together, away from the "groundhog day" routine they were going through.

"A lot of families don't know each other any more. It is really sad and I was one of them," she said.

"You live in the same house, you pass each other and life is so quick and one day you wake up and go 'Oh my god, I am 36'.

"My husband had got to this age where everything became routine. The same thing, more bills come in.

"This is about creating experiences for our family, and the experiences are worth much more than any sort of thing you could buy."

Ms Roche said her daughter, who will log in to her school remotely to complete Year 9, was excited about the opportunities that lay ahead.

"I said what do you think about doing this, she was part of the decision-making process, and she said 'Mum, some people will never get this opportunity so I would like that opportunity'," Ms Roche said.

So what concerns Mrs Roche the most?

"Being around the whole entire family and not having that break, not being able to have time for Mark and I, I do worry about the balance," she said.

When asked what will happen after the 12 months are up, Mrs Roche said she couldn't imagine "slotting back into normal life".

"We have quite a bit of flexibility with what is going to happen afterwards but we have nothing set in concrete because I think then that is too closed," she said.

"I can't imagine slotting back into normal life after the 12 months, I think for us there will be a drastic change, but I can't place it yet.

"I would like to end up somewhere where we are all happy."

The Roches intend to set off on January 7 and travel around the coastline of Australia.