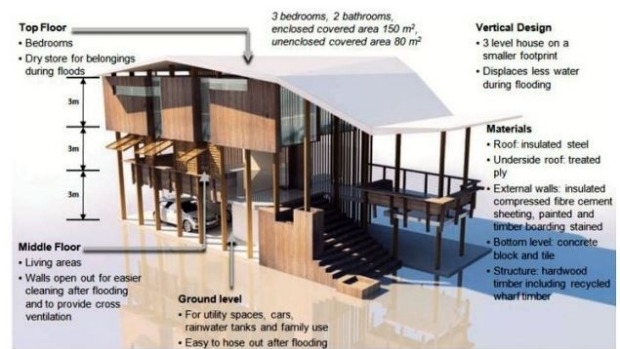 Here are five things that are no longer as they were before the floods which moved through Queensland as a sodden, muddy, wet shroud.

The town of Grantham, 100 kilometres west of Brisbane in the Lockyer Valley, was rebuilt on a nearby ridge after an Australian-first relocation project called "Stengthening Grantham".

The $18 million scheme was given the go-ahead in May 2011 and the first residents had moved into the new homes by Christmas 2011.

Before this decision, 10 of Grantham's 492 residents (in 2011) had died as a wall of water washed through the Lockyer Valley, smothering the original town, where 148 homes were destroyed or damaged beyond repair.

Residents swapped lots of land then paid to build their new homes with their insurance payouts backed by special grants from the Premier's Flood Appeal, put in place by then-premier Anna Bligh.

People living in Grantham, Murphy's Creek, Postman's Ridge, Withcott and Helidon were given the opportunity to move to higher ground under the voluntary land-swap initiative.

By late 2015 120 blocks of land in old Grantham have been "swapped" for blocks of land up high in "new Grantham" and there are about 70 homes now in place on those blocks.

John and Kathy Mahon were the first residents to move to the new Grantham on December 11, 2011, largely because their grandchildren refused to come back to the old house in Grantham.

As he moved in that day, Mr Mahon expressed the feelings of thousands affected by the 2011 floodwaters.

"Your house should be your castle. It should be some place where you are safe," he said.

"And we should be safe up here."

Five years on, the Mahons have had a mixed time in their house in the "new Grantham".

Mr and Mrs Mahon are happy up high, away from any flood risks, looking over their friend's farms, watching what they have planted. Their four children, Andrea, 38, Jess, 28, Brad, 32, and Rachelle, 35 are regular visitors, bringing their grandchildren to the new house.

John is back working as a butcher, now in Plainlands. Son Brad works with him.

However one grandson, Liam – now 10 – was diagnosed with Crohn's disease in October 2014 and has been in and out of the new Lady Cilento Hospital at South Brisbane.

Young Liam – still as cheeky as hell – has had part of his bowel removed and is recovering after a recent iron infusion.

"But you can't look back," Kathy Mahon says.

By July 2011 Queensland's chief scientist Geoff Garrett released a report in which one chapter suggested we should be rethinking the design of our homes.

Architect Michael Rayner suggested in the report an 11-metre tall, three-level home where the ground floor could simply be housed out.

The idea came after Mr Rayner's West End home was flooded in January 2011.

By mid 2011 Brisbane City Council had secured $75 million to have the city landmark rebuilt.

In August 2011, it was revealed that a yacht that had sunk in the city Botanic Gardens stretch of the river just upstream from the Story Bridge during the floods had drifted downstream and was resting on the floor of the Brisbane River in the path of the new Riverwalk.

By November 2011, the public voted on five options and 1300 chose a design that was one-metre wider than the original and anchored in the river bedrock.

Brisbane's new-look Riverwalk was opened in September 2014, although a late contractual blowout saw the $72 million bill escalate to $78 million.

It now draws more than 3000 walkers, cyclists and joggers along its 900 metre length from Petrie Bight to New Farm each day.
4. The Wivenhoe Dam operating manual

On April 1, 2014, more than three years after the January 2011 floods, then-premier Campbell Newman , released new operating guidelines for how Wivenhoe Dam should be managed.

Wivenhoe Dam is Queensland's largest dam and on the Brisbane River, upstream of both Ipswich and Brisbane.

It serves two functions: to store drinking water and to hold back floodwaters from rain falling into the Upper Brisbane Valley.

In basic terms, when the drinking water section is full, Wivenhoe Dam is classed as being 100 per cent full. As the floodwaters is collected and the dam level rise; the second 100 per cent fills.

In the January 2011 floods, Wivenhoe Dam reached its highest-ever level at "191 per cent" full, but still below the level when water would flow over the top and erode the wall (225 per cent).

However a series of leaked emails which were reported showed dam management staff had difficulties interpreting the Wivenhoe Dam operating manual, in terms of deciding how long to withhold water, or when to decide to release water.

After a series of inquiries Mr Newman released new operating procedures for Wivenhoe Dam in 2014.

However that means extra "space" was available for floodwater storage within the dam.

Improved automated warnings were announced by SEQ Water in November 2015 for residents living below Wivenhoe Dam.
5. The families who lost their loved ones

Their families' lives were changed forever.