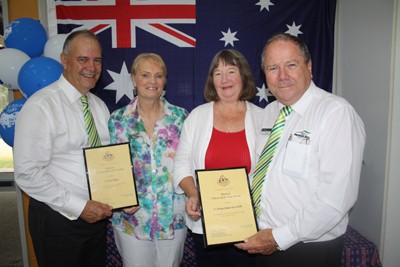 He is used to presiding over Australia Day ceremonies but Bob Millar was a focus of one of them today.

The Samford-based Moreton Bay Region councillor was named as joint recipient of the Dickson Citizen of the Year honour at a ceremony at the Samford Community Centre.

Cr Millar, who was MC for a citizenship ceremony hosted by Samford Rotary Club earlier in the morning, said he was “absolutely chuffed” to receive the award.

The Division 11 councillor shared the award with fellow councillors Brian Battersby (Division 10) and David Dwyer (Division 7), who will also retire from council in March.

Collectively the three men have served Moreton Bay Regional Council and the former Pine Rivers Shire Council for 78 years and have “worked closely together for the last 16 years”.

“As March comes I think we’ve got more than 100 years of local government experience leaving this council and three of them were recognised with Dickson Awards, and we’re just absolutely stoked,” Cr Millar said.

“I received the award of Samford Citizen of the Year in 1999 and I’ve presided over many of these (awards) events in one form or another.

“To receive an award today is just absolutely amazing.”

As a young teenager living in Logan, he grew up on the wrong side of the law and was incarcerated several times.

“Obviously I changed my life but not to get any awards like this – I did it for myself and to help others – but it (the award) makes me feel proud in myself,” Mr Morriss said.

“I love going to juvenile detention centres but I’m not going just to talk and to tell them my story, my company East Coast Apprenticeships actually offers apprenticeships to get them out of jail and into work.”

The Samford, Dayboro, Pine Rivers and Bray Park-Strathpine branches of the RSL were recognised for arranging major ANZAC Centenary and remembrance projects, unveiled last year to mark 100 years of Australian troops landing at Gallipoli in 1915.