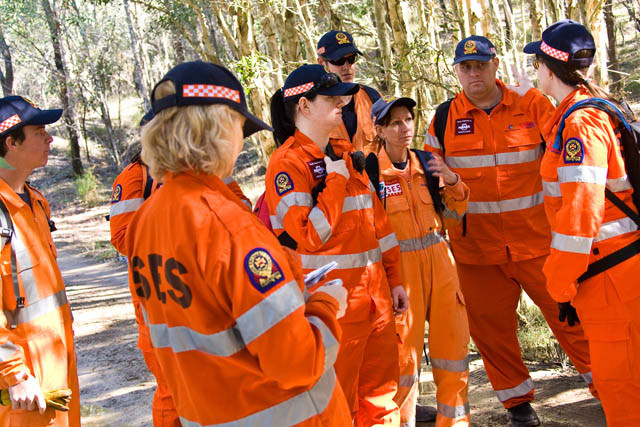 As the State Emergency Service (SES) celebrates 40 years of hard work, one person is looking towards its future and further embracing technology.

SES volunteers are widely known and recognised for their hard work, selfless efforts and orange overalls — helping out in everything from flood and storm damage to assisting emergency services on the field.

The SES evolved from the former Queensland Civil Defence Organisation, which began in 1961 to deal with emergencies in the event of a nuclear war.

SES acting assistant commissioner Peter Jeffrey said during the celebrations marking the volunteers' accomplishments that emerging technologies would soon be able to help members in the future.

I think the SES when talking with anyone in Queensland it's a trusted organisation and that goes to the reputation that's been built by the effort and professionalism by the volunteers.

"We're looking to monitor technology and see how we can use that," he said.

"One thing we've done in recent times is an effort to reduce paperwork and red tape so that time volunteers give us is what they give to the community not sustaining the bureaucracy.

"We've used technology in most cases to eliminate that — things equivalent to apps and smart phone-type usage.

"In the field of search, clearly that's a fascinating area for technology, even old technology like infrared.

"But there's a number of equipment options we can look [at] so we can search a wider area and limit the time the volunteers are away from their jobs and families.

"However, a lot of our work will always be damn hard manual labour typically in hot and humid conditions."

'Contributions made big and small is invaluable'

"Contributions made big and small is invaluable and respected throughout Queensland," he said.

"I think the SES when talking with anyone in Queensland, it's a trusted organisation and that goes to the reputation that's been built by the effort and professionalism by the volunteers of the SES."

To those considering signing up to their local SES group, acting assistant commissioner Jeffrey recommended they treat it like they would a job interview.

"Do some research, do your homework and we will welcome you along and will be delighted to have a chat and bring them into the orange.

"We do have a volume of training and it does require a commitment.

"It does take time away from family and employers but we strongly encourage people to ask the question, to go to our website, to talk to people who may have served and get a perspective form them on what it's like to be a member.

"The unifying thread we've seen in recent history is the sense of people who want to give back to their community. We see that from our youngest members and we see it through to our senior members as well.

"It's a unifying thing about being a member of a community and how you might contribute back, to build the resilience and strength and character of that community."