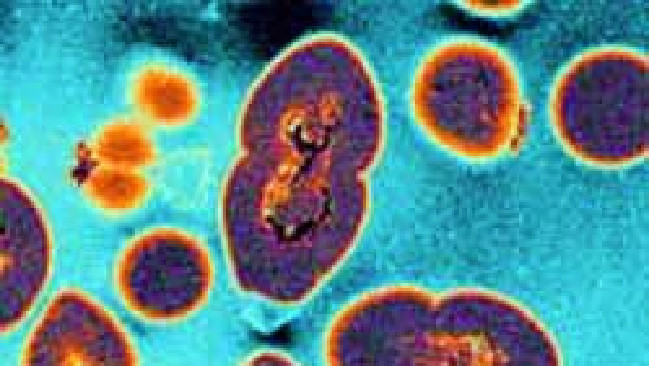 For years experts have warned there would come a day when antibiotics would cease being effective.

And it seems that day could be sooner than first thought after scientists discovered a new superbug that is not just impervious to the last line of defence medication, but has the ability to infect other bacteria.

But instead of destroying its virulent cousins this new strain of e.coli actually strengthens them by giving them the same antibiotic shield.

The unstoppable superbug was first found in China a few weeks ago.

Chinese and British scientists identified the first strain in a pig, then in raw pork meat and then in a small number of people.

Experts, while worried about the potential effect this discovery would have, hoped it would remain in China.

But this week those hopes were dashed when researchers in Denmark revealed they had found a similar strain in poultry from Germany as well as in a Danish man who had never travelled outside the country.

The superbug has also been found in Malaysia.

Further tests carried out on food samples from 2012-2014 by the Technical University of Denmark’s National Food Institute in Søborg and the State Serum Institute in Copenhagen, found the deadly mutation was present.

This sparked calls from the head of NFI’s genomic epidemiology group, Frank Aarestrup, for other universities with similar databases to carry out testing, online health magazine STAT reported.

What makes this strain different from other e.coli is that it carries a gene named mcr-1.

It is thought this gene is what gives the strain its super-strength and the ability to infect other bacteria.

Dr Sanjaya Senanayake from ANU College of Medicine, Biology and Environment told news.com.au the Danish discovery was a real worry.

“It was a problem when we heard they were found in China a couple of weeks ago but one had hoped that it would just be in China and wouldn’t spread too quickly but they have now found it in Denmark,” he said. “These are very bad superbugs to have.”

He explained while the risk to Australia was not as serious as other parts of the world, the rate at which the bacteria can spread, and how easily, could be devastating.

“We in Australia are a lot better off than other countries in terms of dealing with resistant bacteria but we are starting to see them come here,” Dr Senanayake said. “The issue of course is Australians travel and when people travel and visit other countries, they drink the water, eat food, walk around and you pick up the local bacteria.

“A number of studies have shown that travellers going to countries that have resistant bacteria in them will often come back with those resistant bacteria sitting in their bowels. If it doesn’t cause an infection then it’s OK and usually after a few months they lose that bacteria. But if it does it can cause serious problems.”

He explained the emergence of medical tourism also posed a risk adding that hospitals in general are known to have a higher proportion of superbugs.

If a person travelled to a country where the superbug had been found and underwent a procedure in a hospital, he said they had a greater risk of contracting the drug-resistant bug.

WHY IS THE EMERGENCE OF THIS SUPERBUG SUCH AS BAD THING?

Well, it basically means the bacteria that causes common gut, urinary and blood infections in humans, can now become “pan-resistant” to all antibiotics currently available.

Not only that, but it will make some infections incurable, unless new kinds of antibiotics are developed.

Plus this new strain has the ability to make other bacteria from different families resistant, opening up another can of worms.

HOW COULD A POTENTIALLY DEADLY SUPER-RESISTANT BACTERIA EVOLVE?

One of the main theories is the overuse of antibiotics.

While there has been much discussion about the overprescribing of antibiotics by doctors, the bigger concern is the overuse in the agricultural industry.

Since the discovery in Denmark, experts from around the world have begun calling for a ban on the use of the antibiotic colistin in the agricultural industry.

Colistin is an old drug that was rarely used because of the emergence of newer drugs.

But since antibiotic resistance has increased, the need to preserve the drug in the fight against resistance has been imperative. So imperative that in 2012 the World Health Organisation designated it as critically important for human medicine, STAT reported.

Despite this, vast quantities of it have been used to help animals grow. In China, the drug is used more in animal production than it is on people, Timothy Walsh, a medical microbiologist from Cardiff University in Wales, told STAT.

Dr Senanayake told news.com.au while the overuse of antibiotics in agriculture is a major factor, so was the overprescribing and over use by humans.

“Doctors can prescribe antibiotics better, and we have to decide whether we need to give antibiotics, and if we do we should give a narrow antibiotic that doesn’t attack other bacteria,” he explained. “As patients or consumers we should also decide if we should be asking for an antibiotic at all.

“But one of the bigger factors is that animals consume a lot of antibiotics. In the US, for example, about 80 per cent of antibiotics used are used in animals not humans.

“They are being given to animals to prevent infection but also to promote growth. They think antibiotics help animals grow. This is actually an issue that is being looked at. Vets and doctors are trying to monitor and curb antibiotic use in the animal industry.”

CAN IT BE DEFEATED?

Researchers from the US and Denmark are trying to track its origin but it is thought it would most likely be China given its prevalent use of colistin.

The bulk of the 12,000 tonnes of colistin fed to livestock yearly around the world is used in China.

According to New Scientist, antibiotic growth promoters were banned in Europe and Denmark, ironically, was among the first to ban them.

But in 2013, the European Medicines Agency reported that polymyxins (the group of drug colistin belongs to) were the fifth most heavily used type of antibiotic in European livestock.

WHY NOT DEVELOP MORE ANTIBIOTICS?

Dr Senanayake explained research and development of new antibiotics had actually slowed over the last decade because there were so many already on the market.

But he said there has been a push in recent years by governments, in particular the US to find more.

“The US government is trying to provide incentives for pharmaceutical companies to make antibiotics,” he explained. “They are doing things like trying to reduce the regulatory burden for them.

“It has been estimated that by 2050 around 100 trillion dollars will be spent on antibiotic resistant bacteria and there will be about 300 million deaths.

“And even now in the US they say there are over two million illnesses attributed to antibiotic resistant bacteria and about 23,000 deaths.”

Dr Senanayake said while developing new antibiotics was one major part of tackling the resistance problem, less prescribing and less reliance was also needed as well as a major rethink about how they are used in the agricultural industry.

“The chief medical officer in the UK recognised antibiotic resistance as a catastrophic threat and wanted it put into the international register of civil emergencies along with terrorism and natural disasters,” he said. “I think that is a positive thing that top people in government are starting to recognise it as a big problem.

“And while it’s not the biggest problem in the world it certainly is an important problem.”