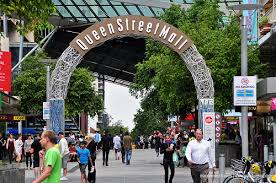 Hundreds were waiting outside Brisbane's department stores when doors opened at 9:00am.

In the nine hours of business, $368.1 million is forecast to be spent in Queensland, including $5.8 million in Brisbane's CBD.

Across Australia $2.19 billion is expected to be poured in the shopping blitz, around 6.7 per cent more than Boxing Day last year.

That will be helped in part by the extension of trading hours in New South Wales.

This year will be the first since 2008 in which department stores outside of Sydney and Bondi have been allowed to trade on Boxing Day, after the NSW Government amended the laws last month.

NRA chief executive Trevor Evans said this year, shoppers were more keen to part with their money in store rather than online amid the low Australia dollar.

"There's been a really strong start to the Christmas shopping season in 2015, so we are expecting that momentum to continue on Boxing Day, and throughout the entire January sales period," he said.

"We are seeing a fantastic boost to in store shopping in 2015, which is a welcome boost to retailers as well as to the employment sector."