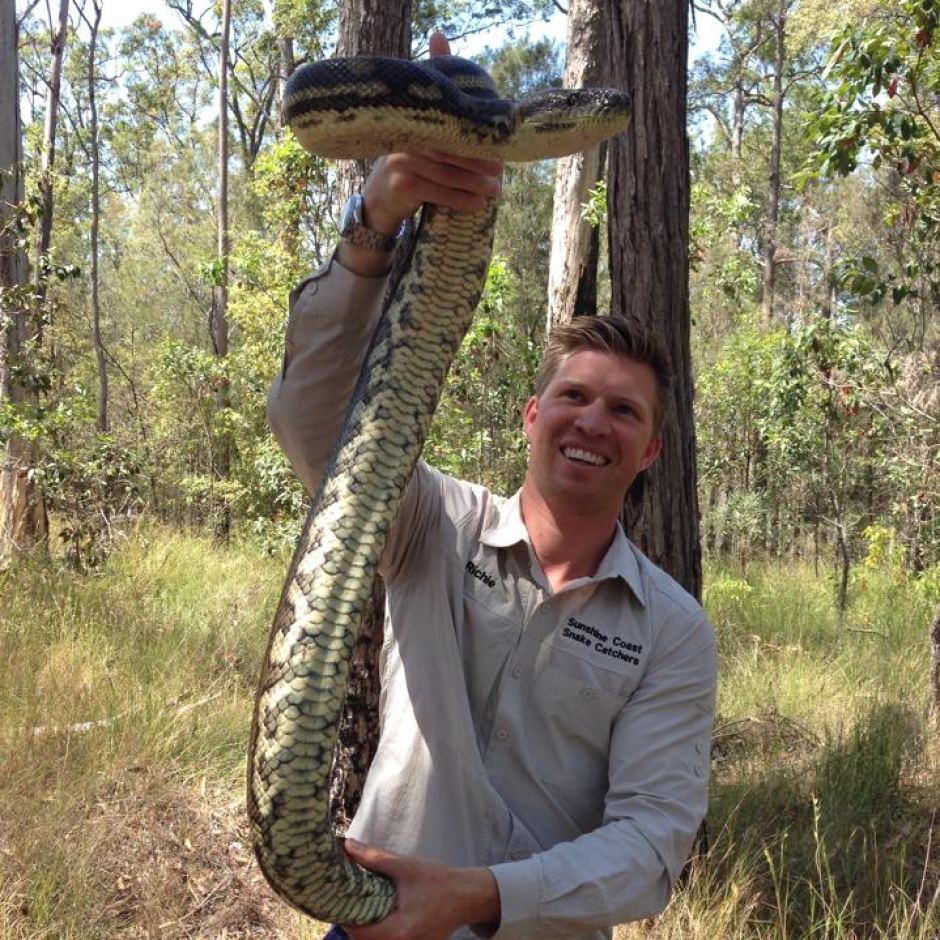 A Queensland snake catcher is giving the world a taste of his dangerous profession after nabbing a role in a new British reality show.

The program — set to air on a major UK television station next year — follows a group of British would-be animal "pest" experts, as they gain experience with snake catching and other tasks in Australia.

Sunshine Coast snake catcher Richie Gilbert jumped at the chance to show the rookies the ropes, in a bid to raise awareness of the slippery visitors often found in the suburbs.

While Mr Gilbert was tight-lipped about the program specifics, he said the trainees were filmed on jobs from the beach to backyards, handling venomous and non-venomous snakes.

The group also accompanied a number of other reptile and animal experts across the country.

It has not been unusual for Mr Gilbert to catch eastern brown snakes — the second deadliest snake in the world — from inside people's homes in his job.

Photo: A snake lies on a keyboard in a Sunshine Coast home. Snake catcher Richie Gilbert was called in to remove the snake. (Supplied: Facebook )

Earlier this week Mr Gilbert came to the rescue for a woman who had not been aware a red-bellied black snake had been lurking under her couch for days.

The new program was not the first time Mr Gilbert had been approached for a television deal.

Mr Gilbert has created a following online with his candid videos and stories via his Facebook page that has attracted more than 30,000 likes.

But he said he had always knocked TV offers back because they never fit with his main goals— to educate people about snakes and other reptiles.

He said his dreams to create a documentary or television show were inspired by his idol Steve Irwin.

"I've always wanted to do my own show or documentary, but I wanted to make sure the right messages were put across," Mr Gilbert told the ABC.

"The people that had approached me had wanted to sensationalise things, I didn't want it to just be reality TV, it needed to be something more.

"I wanted to do something similar to Steve Irwin, with a little more education and less just entertainment.

"When I saw Steve Irwin on TV when I was younger, I knew then that's what I wanted to do.

"It was my childhood dream to work with Steve and when I moved to Queensland I thought it would only be a matter of time before that happened.

"People say I could be like the next Steve Irwin, but I won't ever be like him ... he's amazing."

Catching snakes since he was five

Mr Gilbert has never formally trained in snake catching, but his unlikely friendship with scaled animals started from a young age.

"Ever since I could walk and talk I was catching reptiles," he said.

"My mum says I came out of a bush with a bucket with a snake in it when I was five, so I guess that's what could be called my first snake catch.

"From them onwards I was just fascinated and it grew from there."

Mr Gilbert started snake catching in Newcastle, before moving to Brisbane and eventually starting his business on the Sunshine Coast.

A dangerous job with the world's deadliest snakes

Mr Gilbert oversees a team of about 12 snake catchers on the Sunshine Coast, who travel throughout the area taking calls 24-hours-a-day, seven days a week.

Photo: Sunshine Coast snake catcher Richie Gilbert has never had formal training, but he has always had a passion for snakes from a young age. (Supplied: Facebook)

It can be a tough job, and a dangerous one too, and not every call out goes to plan.

From red-bellied black snakes inside car bonnets, to snakes in bathrooms, front doors, studies, patios and lounge rooms, Mr Gilbert can catch up to four snakes a day.

He said as suburban development spreads, snakes were more inclined to appear in homes.

And the experience for some can be frightening.

"When people call me, they are generally panicking and they want me there as soon as possible," Mr Gilbert said.

"If you see a snake in the house, just get a photo to identify the snake, then back away and close the door, prop a towel underneath and wait for the snake catcher to arrive.

"Definitely don't approach a snake, an eastern brown can get very agitated and become very defensive."

The eastern brown snake has caused more deaths from snake bites than any other species in Australia.

Mr Gilbert was crawling under a 1 metre space under a house trying to retrieve an eastern brown, when the snake dropped from a railing above.

"The 1.5m eastern brown dropped close to my head and it was a stand off for a little while," Mr Gilbert said.

"Honestly I prayed that day that God would make that snake turn the other way.

"I got out and grabbed the snake by its tail and as I've done this, the owner's dogs came charging towards the snake, so I'm holding an eastern brown in one hand and moving the dogs away with my right leg.

"It was just crazy.

"My wife knows I'm capable and that it's part of the job but after that one she said 'don't do that again'."

Photo: A family on the Sunshine Coast is wary of a snake at their front door at a suburban house. (Supplied: Facebook)

In South Australia snakes are a protected species and killing them comes with a potential $10,000 fine and two years imprisonment.

In New South Wales it is illegal to kill native snakes and in Western Australia residents can kill snakes without penalty, only if they feel immediately threatened.

In Queensland it is also an offence to kill, injure or take snakes from the wild.

Mr Gilbert said his heavy Facebook presence had acted as a handy tool to educate the public on snakes.

"I feel people can relate to me...I always do videos and answer their questions, so they are more inclined to listen to what I say, I think," he said.

"I know a lot of people's opinions on snakes has changed since they have met me or spoken to me and I'm proud of that."