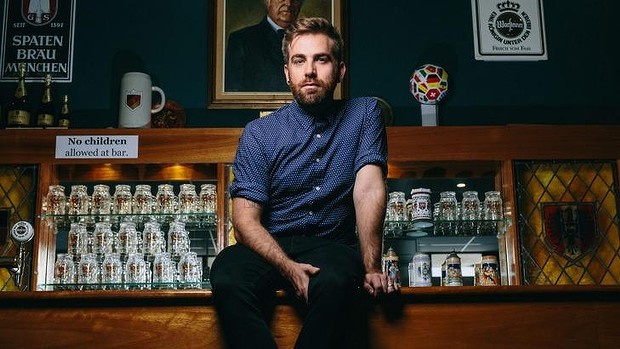 One of Australia's shrewdest and most intriguing songwriters – with a belt of ARIA awards – Josh Pyke plays two concerts at the huge Sunshine Coast music and culture festival.

He plays with his band on Sunday December 27th at the Amphitheatre Stage late and then on the Monday at the Grande Stage just after lunch.

This year he released, "But For All These Shrinking Hearts", with its quirky etching style cover which tells the story of New York scam artist Charles Redheffer's failed attempt at creating the world's first perpetual motion machine in the early 1800s.

The cover idea for his fifth studio album began early in 2015 when Josh was looking to find a design for a new tattoo, Josh Pyke said

"Well I had a few tattoos and I was looking to get another one," he said.

"So I was looking for something like a perpetual motion machine because I like the idea that it was a permanent reminder to myself to keep pushing forward."

What he discovered was the images of New Yorker Charles Redheffer's perpetual motion machine and eventually a story about the man himself.

"He made a fake one and was charging people a dollar to come and see it and he got busted when a sceptic examined the machine and found and old man sitting up top (in another room) cranking a wheel."

There was no perpetual motion for Charles Redheffer, but it gave Josh Pyke food for thought.

"I just thought it was a good metaphor for what I was disillusioned about the world at the time – and still now," he said.

"Which is that we all still go on living our lives kind of thinking that we are in control , but there all these bored old men at the top in the back rooms just cranking the wheels keeping things going at an unsustainable pace."

At the time of writing the album, federal arts funding cuts were hurting.

"And there was a lot to be disillusioned about," Josh Pyke said.

After four studio albums; Memories and Dust, Chimneys Afire, Only Sparrows and the Beginning and the End of Everything, Josh Pyke built a studio at his home in 2015 to record But For All These Shrinking Hearts.

But he still tours a lot, as a father of a young family tries in 2015.

He remains an accomplished storyteller on stage, as much as he is in song, with richly-woven, interesting rich melodies and innovative song structures.

At the 2015 Gympie Muster he won over a hard group of new fans by simply mixing new songs with a few songs that people had heard on the radio and drawing them in further and further to new songs.

Josh himself remembered the Gympie Muister gig differently, more as him offering songs that people knew first and then luring them deeper.

"At festivals I'm a firm believer in playing songs that people will know because I think festivals are a great opportunity to connect with people," he said.

"It's more like a conversation rather than me standing up there and blaring songs at them."

And he keeps on keep on. Only this week he announced he would launch a beer at Woodford – quite appropriately.

"I'm super excited to play Woodford and Falls, and also release my beer," he said on his website.

"It's called The Summer, and it's a collaboration with Young Henry's Brewery here in Sydney….It's going to be delicious!"

And he has a song called Hollering Hearts in the new Sacha Baron Cohen film – The Brothers Grimsby.

Perhaps Josh Pyke is building up to a state of perpetual motion as 2015 rolls into 2016.