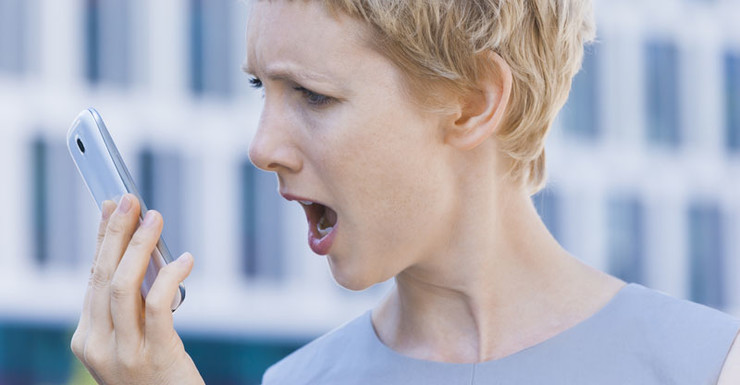 How to avoid a nasty mobile phone bill surprise

Australians are wasting more than $10 million a month in excess data usage charges, unaware of how much is being chewed up and by what, a new survey reveals.

The research comes as the Federal Government examines ways to protect consumers from unexpectedly high bills, through a Senate inquiry into ‘bill shock’.

The new finder.com.au study found that while two out of five Australians went over their data allotment, six per cent did it regularly.

Based on 17 million adults in Australia – and some major telcos charging $10/GB for every extra gigabyte – it found that Australians were regularly wasting a combined $10.2 million on excessive mobile data charges.

Finder.com.au compared the amount of data usage per one hour for different activities.

Emailing used about 5MB, music streaming chewed up about 50-100MB and video streaming ranged from 1GB to 7GB, depending on definition.

For many of the 1351 survey respondents, 55 per cent said they ‘had no idea’ how much data they used for different tasks.

Another 26 per cent of respondents said they had ‘some idea’ of where their data went.

Head of the Senate Economics Committee, Labor Senator Sam Dastyari, is leading a ‘bill shock’ inquiry after suffering himself, when his latest mobile phone bill arrived at a whopping $15,175, increasing to $17,286 when including his office landline, from January to June 2015.

He told The Australian he was “embarrassed” and “shocked” about the final total, and decided to source his own phone plan independent of the public system, paying his own bills going forward.

“I have to say, I now understand bill shock,” Senator Dastyari said.

“While I have never apologised for being a workaholic, I certainly should be better at managing my phone. I can negotiate a better deal if I pay for it myself, so I will.”

How to reduce your usage

Finder.com.au tech expert Angus Kidman said that while there were tips to reducing data usage, the best option would be to follow Senator Dastyari’s lead and find a better deal.

“Our survey found that the average Australian uses 2GB of data per month, but the fact is we’re seeing many people exceeding their allocated data usage. If you’re one of them it may be time to reconsider your current plan,” Mr Kidman said.

“Australians looking to minimise their data bills should look at where the bulk of their phone costs are coming from.

“The first step there is to work out whether outright plans are actually cheaper for your usage behaviours, or if a plan will provide you with better value.”

“When you’re in a different country and time zone, you’re more likely to be using Facebook than making phone calls, uploading photos and video, taking lots of photos and using Google Maps to find your way around,” Mr Kidman said.

“Don’t just rely on the default roaming settings. You’ll end up paying an absolute forune, especially for data. For example, Telstra’s default charge is $3 per megabyte.

“The most affordable option is usually to buy a local SIM when you land. If travelling with a partner or friend, look for a SIM on a network that allows free calls and texts to other customers on the same network.”

Facebook: The addition of autoplaying video on Facebook is a prime culprit for chewing up lots of your quota. Always disable Facebook’s auto-playing of video streams, as well as checking the exact settings for data usage within the Facebook app to lower image quality.

Spotify: If you’re regularly going over your data due to music streaming, consider paying the $11 monthly fee to have access to the offline playing option.

Candy Crush: This applies to all games – drop your phone into airplane mode before playing, as some games will use data even if it’s not required to run. It may also reduce the number of advertisement pop-ups.

Web browsing: Turning off ‘image loading by default’ is an easy way to reduce the amount of data per web page – definitely a good case of set and forget.

Email: Set your email to check infrequently, because even checking sessions use fractions of data, and your provider may charge in larger blocks even if you’re only using small amounts.

Video: Try to set the video quality as low as your eyes can handle. You’ll not only save data costs, but also minimise the amount of buffering each video has to perform before it will play smoothly.