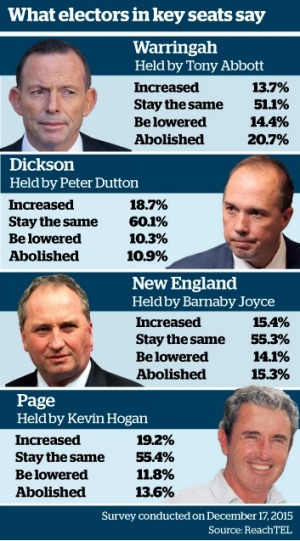 Coalition voters do not support cut in Sunday penalty rates

The Turnbull government will face overwhelming opposition from voters in key Liberal and Nationals seats if it supports the move to cut Sunday penalty rates.

Polling across the federal electorates of Warringah, held by former prime minister Tony Abbott, Dickson, held by Immigration Minister Peter Dutton, New England, held by the Nationals' deputy Barnaby Joyce, and the NSW seat of Page on December 17 found between 65 per cent and 79 per cent of people in those electorates want Sunday penalty rates in the retail industry either kept the same or increased.
<i></i>

In Warringah, 51.1 per cent of electors want Sunday rates for retail workers to stay the same and 13.7 per cent want them increased.

Mr Abbott and Mr Dutton are prominent members of the Liberal Party's right wing, the source of strong support within the Coalition for reducing weekend penalty rates.

The ReachTEL polling was conducted two weeks after the Productivity Commission's final report on Australia's workplace relations framework was handed to the Turnbull government and just four days before the report was released to the public on Monday.

Voters were asked about Sunday penalty rates in the retail sector specifically. They were not asked about the hospitality sector.

Its recommendation did not extend to emergency workers, nurses, or teachers.

Employment Minister Michaelia Cash said the idea was something the Fair Work Commission could adopt if it wanted to, but it had nothing to do with the Turnbull government.

"The government has no plans to change penalty rates," Ms Cash said this week.

But Labor's employment spokesman Brendan O'Connor has criticised Senator Cash and the Turnbull government for refusing to rule out the recommendation immediately.

"If Malcolm Turnbull and this government does not want to support cutting penalty rates, then they can reject the recommendation of the Productivity Commission today," Mr O'Connor said.

"But the minister has chosen not to do that."

Executive director of the Australia Institute Ben Oquist said the polling showed it was not just Labor voters who were concerned about the cuts to penalty rates.

"It also indicates it would be wise for Malcolm Turnbull to ignore the pleas of those conservative MPs in his ranks, who risk being an electoral liability for the new Prime Minister," Mr Oquist said.

"Public holidays like Christmas and days like Sunday are different to normal workdays and should be treated as such."

The strength of opposition to a reduction in Sunday penalty rates was similar in Mr Joyce's New England, where 55.3 per cent of voters wanted rates to stay the same and 15.4 per cent wanted them increased.

In Page, held by the Nationals' Kevin Hogan, 55.4 per cent of voters wanted rates to stay the same, while 19.2 per cent wanted them increased.

In Mr Abbott's seat, 68.5 per cent of women wanted rates to stay the same or be increased, compared to 60.9 per cent of men.