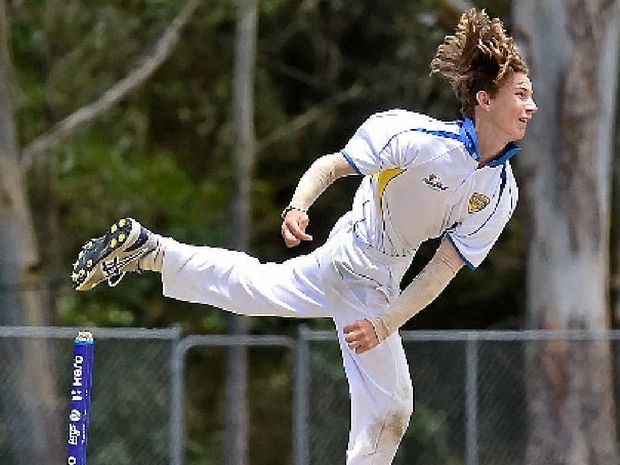 Nambour and Caboolture conjured up great victories in round seven of Sunshine Coast fixtures on Saturday, relying on a magnificent captain's knock by Nambour and a last ditch partnership from the near dead Snakes.

The Cutters were set 230 by Maroochydore Red, who lost just three wickets, based on a bat-through 85 from opener Doug Newell.

Then Greig went early, at 21 and Billy Holmes for no more. Wallace and Ledger took the total to 76, dominated by the captain, now 57. Tom Munro found Wallace's edge and added Josh Matthews for 4/76, with support fading, but Ledger scored freely, and the run rate was seven/ over.

Jayden Francis helped the board to 111 before Munro gave Darren Martens another catch behind, and a young Angus Douglas hung in for 19 while Ledger reached three figures. The chase steadied as the Cutters passed 150 five down.

Captain Aspinwall himself broke through for Martens fourth scalp behind, and reset the equation for a fragile Cutters' tail. Now 64 remained at 6/166, as Hayden O'Connor assisted with 13 runs of his own in a 32 partnership..

A Munro slow ball bought the cover catch of O'Connor to introduce a tentative Andy Coughlan, and Ledger stepped up the pace with the return of spinner Damien Said. Run rate was no problem, needing 35 in 16 overs, then after 39 overs the goal was in sight at 218. The first three balls of the 40th over found the boundary, bringing the win and the captain's 151, plus a bonus point. Ledger's eighth local century celebrated his round three addition to the 5000 run club, and is the highest individual innings in a chasing side in local one-day cricket.

Caboolture's rescue was from 9/75 needing 129 against Gympie, on a track where rain and conditions had allowed little of the usual immaculate ground work. The Gold faced a stifling welcome from Matts Parkinson and Anderson, the spinner's return a miserly 2/12 off 10 overs. But Gympie persisted to 128, knowing the track was not going to change.

Nor did it, as the visitors' medium pacers wreaked their own havoc. At nine down it should have ended soon, then Toby Millyard and Matt Parkinson soaked up the pressure. They defended, turning the odd single, with 41 dot balls to Millyard and 21 to his mate. The Snakes were 122 starting the final over, and Parkinson added Dean Chandler's first two deliveries to his dot collection, then hit the third to the midwicket boundary. When the next ball followed for three runs, the home side had demonstrated yet again that Caboolture just won't lie down.

Glasshouse and Maroochydore had less dramatic wins, batting first against Caloundra and Tewantin and overcoming good resistance for a bonus point each.

Craig Davies scored 112 for the Blues in their 8/268 , while Liam Moffett and Jeremy Schultz put in 50s in the Rangers' 8/196. Round eight fixtures were held yesterday.