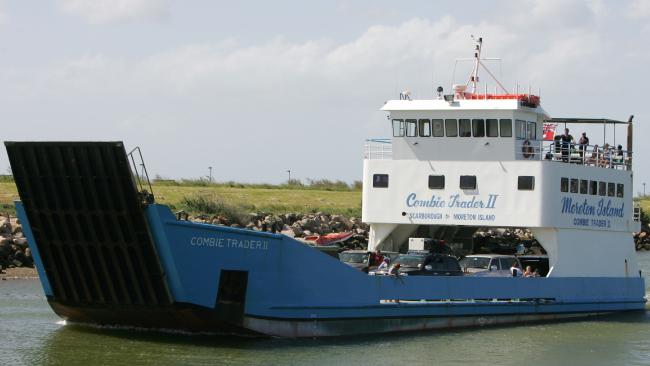 More than a year after the State Government approved an expression of interest for a permit to operate a barge from the Redcliffe Peninsula to Moreton Island, an agreement is yet to be reached.

Residents in the Moreton Bay and Sunshine Coast regions need to travel to the Port of Brisbane for a ferry to Moreton Island’s Tangalooma, or Victoria Point for access to Kooringal on the southern tip of the island.

Without these services or a private boat, Moreton Island has been out of reach for many residents since the closure of the Combie Trader II in July, 2008.

“We can see (Moreton Island) from Redcliffe and would love to go there for a holiday but have no way of getting there without having to travel a long way and it costing a fortune,” mum-of-five Sarah Crawford said.

A spokeswoman said Queensland Parks and Wildlife Service (QPWS) was still in discussions with Bhagwan Marine, the company awarded the expression of interest for the permit in November, 2014.

“QPWS is still in discussions with the proponent to identify a suitable mainland landing site for the barge operation,” she said.

“Commencement of the service is contingent on resolving the relevant issues, and we continue to

work with the proponent.”

When asked if there was a time frame for this process, the spokeswoman replied: “no”.

Earlier this year, a QPWS spokeswoman said Bhagwan Marine was working with the Department of Transport and Main Roads (TMR) and Moreton Bay Regional Council (MBRC) to identify an acceptable departure point.

But, TMR would not comment on the progress of those meetings.

“We previously met with QPWS, MBRC and a proponent, regarding the potential operation of a service,” a spokeswoman said.

“Questions regarding operations of the barge are best directed to QPWS.”

The former landing site of the Combie Trader II has changed since 2008, meaning a new barge could not depart from the same location.

A MBRC spokesman said Bhagwan Marine was looking at other potential sites within the region , but a development application for mooring and other infrastructure had not been received.

“Provisions have been made in council’s new planning scheme for a future barge service at the Scarborough Boat Harbour as a generator of economic activity,” the council spokesman said.

“Council is awaiting further advice from the proponent and the Queensland Government as the owner of the Scarborough Boat Harbour and the issuing authority of the relevant permits required to operate a barge service.”

“The reintroduction of a barge service could potentially provide a boost for local businesses and the Moreton Bay region economy,” Cr Sutherland said.

“Council is continuing to liaise with and assist the State Government on a range of matters, but ultimately the return of a barge service to Moreton Island is a matter for the proponent and the Queensland Government.”

Redcliffe State Labor MP Yvette D’Ath said she was “seeking an update on the proposed barge operation from the Department of National Parks, Sport and Racing”.