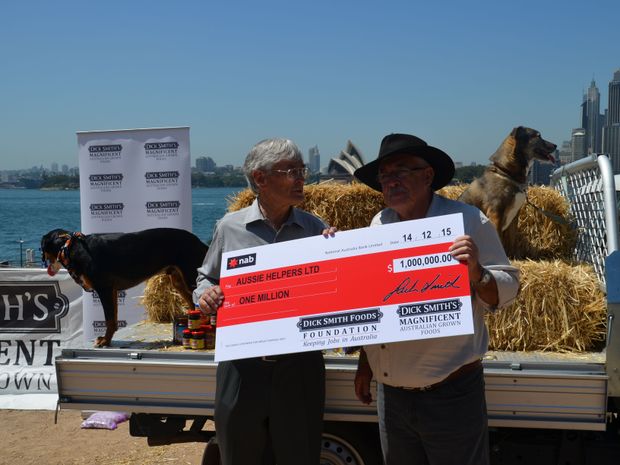 Dick Smith Foods today presented a record donation for $1 million to Aussie Helpers - the Charleville-based national charity assisting farmers who are battling to stay on the land.

It is the biggest single donation made by Dick Smith Foods in its 13-year history. Every year it doles out around half a million in donations.

Brian Egan, co-founder of Aussie Helpers, said the donation will allow him to hire an extra staff member.

"It's big time isn't it, nobody gives a million dollars if you're not doing anything," he said.

Dick has been a long-term admirer of Aussie Helpers, but this is their first major donation from him.

"He rang me up a week ago, just to ask me about Aussie Helpers.

"He just asked us to come down to Sydney.

"There wasn't amounts mentioned at the time."

The money is not going to go to any particular new project or program, said Brian.

"We got so many programs on the road, a lot of people out in the bush are struggling."

Even aside from the money, the national profile Dick's donation will generate is going to help out the charity.

"Publicity is the driver for anything," he said.

"There's a big difference between (just) being behind you and giving you a million!"

In the past 18 months alone volunteers from Aussie Helpers, based in Queensland, have travelled 600,000 km to visit 1,300 families living on remote cattle stations. In some cases these families can only afford to eat every second day, and they don't like putting their hand up for help. Aussie Helpers are there when they are needed most, providing food, emotional and psychological support, even if it's just stopping in for a chat over a cuppa.

"I wanted to support Aussie Helpers because they provide tremendous help for struggling farmers across Australia," said Dick Smith.

"Plus it's mainly run by volunteers and has hardly any overheads.

"The farming community badly needs our assistance. I was in Longreach recently and there was not one blade of grass in sight on much of the land."

Mr Egan gratefully accepted the million-dollar cheque, saying that he and everyone involved with Aussie Helpers was "astounded" at the generosity of Dick Smith Foods.

"I know Dick Smith is a staunch supporter of Aussie farmers, and this amount of money will be changing people's lives for sure," he said.

To assist Aussie Helpers in its great work - or if you need help yourself - contact 1300 665 232 or visit www.aussiehelpers.org.au.