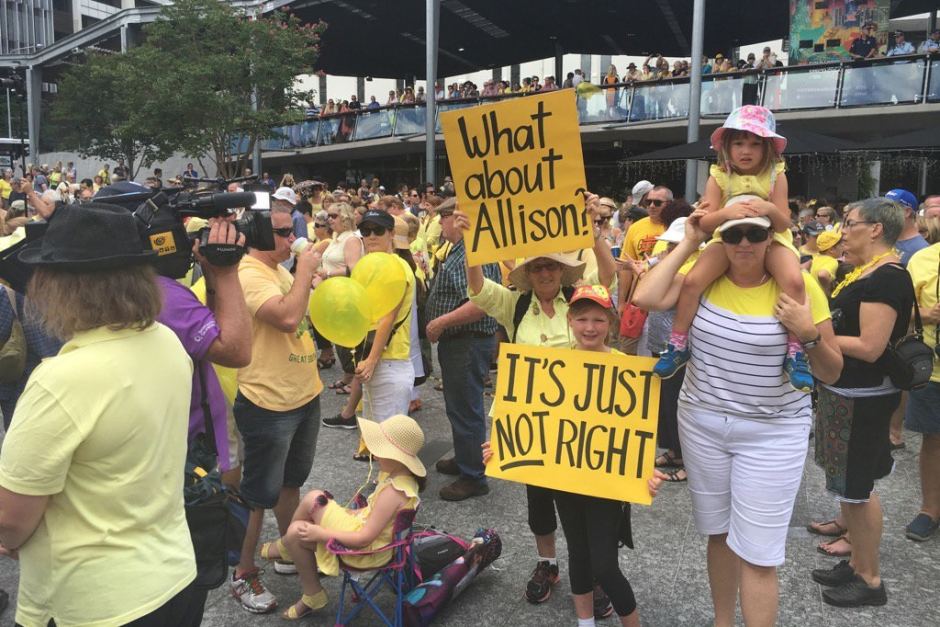 Hundreds of people are taking part in a rally against the downgrading of Gerard Baden-Clay's conviction for murdering his wife Allison.

Hot and humid conditions did not stop more than 1,000 supporters from gathering in Brisbane CBD's King George Square to honour the memory of Allison, who was killed in 2012.

The crowd is protesting the recent decision by Queensland's Court of Appeal to set aside Gerard Baden-Clay's murder conviction and downgrade it to manslaughter.

The rally began with the crowd being shown a video recapping what happened to Allison.

The crowd cheered when organisers spoke out about their aim to get justice for Allison.

Rally organiser Nicole Morrison, who was a friend of Mrs Baden-Clay, told the crowd people across Queensland were disappointed with the judiciary.

"The shock and confusion of last Tuesday's decision resonated within not only those involved with Allison's case but also the community at large and this is the reason we are all standing here today," she said.

"We expect the judicial system to move with the times, they have to because we all need to maintain the genuine belief that our legal system works," he said.

"Equally our laws must move with the times — community attitudes change, then the laws must change."

Marilyn Wybrow said it was the first time she had taken part in a rally.

"I've never protested anything in my life before but I felt so strongly about this — that it's wrong," she said.

Marie Morris said she travelled from the Gold Coast to attend the rally.

"I felt I had to come, for Allison's parents and her children," she said.

Bob Probert said the appeal decision was "an insult to those 12 members of the jury".

Many supporters were wearing yellow, a favourite colour of Allison.

Ms Morrison said the rally was a "very peaceful, positive collection of people within the community".

"To stand together just to let people know — whether they knew Allison or not — have been very affected by her death, by her lengthy trial, and then following the guilty conviction [of] murder, the downgrade in those charges," she said.

"I think the rally ... will be just a really positive message that as a community, we are confused by the downgrading of the [conviction], but we're standing together to start this conversation to hopefully use it as a platform for some positive change."

Gerard Baden-Clay was convicted by jury in 2014 of murdering his wife at their family home in Brookfield, in Brisbane's west, in 2012.

Queensland's Chief Justice Catherine Holmes and two other Court of Appeal judges last week set aside the murder conviction, replacing it with manslaughter, saying there was not enough evidence to prove the former real estate agent had intentionally killed Allison.