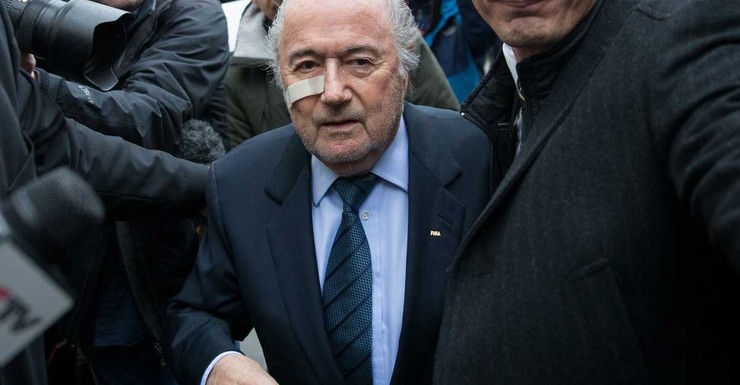 2015 is the year the mob hijacked sport

James Hird blames it on “power and greed”. Why do the world’s biggest sports bodies allow such corrupt operators to rise to the fore?

It’s been a bad year for sport if you’re a fan.

We’ve been ripped off by administrators who seem to be crooks, incompetents or both.

Take football and international athletics. It would seem these two sports have been run for years by snake-oil salesmen.

The last straw was the decision by FIFA’s ethics committee to slap eight-year bans on its semi-delusional president Sepp Blatter and his portly UEFA sidekick Michel Platini.

Platini’s got some footballing pedigree. He captained and managed France and was considered one of the world’s best players in the 1980s.

While Platini was making his mark on the pitch, Blatter was learning the dark arts of football administration under FIFA boss Joao Havelange.

With the assistance of sports impresario Horst Dassler, Havelange built FIFA into a money-spinning outfit through the sale of broadcasting rights, high-end sponsorships and systemic corruption.

Through Dassler’s sports marketing company ISL, sports officials connected to both FIFA and the IOC received over $US200 million in ‘personal commissions’ between 1988 and 2000.

As FIFA general secretary from 1981-98, and president since, Blatter must have known Havelange was on the take.

If he didn’t, he was a fool or delusional.

According to Swiss court documents released in 2011, Havelange and his son-in-law Ricardo Teixeira pocketed around $US42 million in kickbacks from ISL in exchange for FIFA broadcast rights from 1992-2000.

Havelange and Teixeria escaped prosecution while ISL went bust in 2001.

The pair agreed to pay $US525,000 and $US2.6 million respectively to the company’s receivers to avoid prosecution.

A former head of the Brazilian Football Federation, Teixeira has since been indicted by the US Department of Justice on corruption charges.

This followed the curious discovery of payments from a Qatari construction company in Teixeira’s Monaco bank account.

The so-called Blatter and Platini ‘oral agreement’ is merely another instance of FIFA’s dodgy corporate practices.

Blatter wants us – the mug fan – to believe that the $2 million payment to Platini was an above board ‘disloyalty payment’!

Why then was it paid just before a FIFA presidential election when Blatter’s job was on the line?

The Qatari construction magnate and mastermind of the Sheikdom’s 2022 World Cup-winning bid, Mohammed bin Hammam, had his eye on the job.

Why would any country do business with such a corrupt lot?

Yet Frank Lowy and the FFA did use government money.

At 85, Lowy’s showing signs of corporate wear-and-tear, but he’s done a lot for football in this country.

Blatter, bin Hammam and the rest of the FIFA mob played him and the Federal Government on a break.

FIFA had already decided which countries would win the 2018 and 2022 bids. Yet corrupt FIFA officials continued to pocket the money of bidding countries.

Therefore, we entered a bidding process in which the outcome had been decided.

Qatari largesse had bought the Cup and we won a single vote.

As $45 million in taxpayer monies underwrote the Australian bid, a proper inquiry must be held.

Why Lowy or any other honest football official would deal with this crooked mob beggars belief.

Why the Federal Government provided funds suggests a disregard for due diligence.

Given the events of Monday night, we deserve our money back.

But it’s just not Blatter’s mob.

Look at the mess in international athletics.

With the Rio Olympics approaching, how can fans be sure they will be watching an honest event?

Given the revelations about the corruption in the IAAF, it seems fitting the Games will be staged in a city controlled largely by the crooks in the favelas.

To learn that one-third of the medals at the 2011 World Championships and 2012 London Olympics were won by athletes whose doping tests were dodgy is incomprehensible.

To find that the Russian federation supported a systemic doping regime is criminal.

Given the barbaric practices carried out on East German athletes in the 1970s and ’80s – some of whom were minors – the ban on the Russians is well warranted and should remain in place until long after Rio.

To read that the IAAF’s past president, Senegal’s Lamine Diack, is being investigated by French police for allegedly pocketing bribes to cover up doping is astonishing – even by FIFA standards!

Diack’s no stranger to sport’s dark side. Just last week, Le Monde alleged that Diack had received $US1.6 million from the Russian Athletics Federation to fund the 2012 election campaign of the then Senegalese opposition leader Macky Sall.

This followed allegations that Diack had made payments to IAAF-attached doctors to cover up positive Russian doping tests, as well as extorting over a million euros from other athletes to hush-up their doping activities.

This is a man that the new president, Sebastian Coe, once described as the ‘spiritual leader’ of the IAAF.

Coe served for seven years under the Sengalese as IAAF vice-president, yet remained oblivious to Diack’s alleged crimes.

On the face of the allegations, Diack may be proven to to be just another sports crook.

Why do shonks like Blatter and Diack continually rise to the top in international sports organisations?

James Hird hit on the reason when speaking on ‘best practice’ in global sport on ABC Radio National’s The Ticket.

Hird said that the centralisation of administration within sports’ governing bodies has led to increased “power and greed”, and the takeover of some sports by “the wrong sort of people”.

It has also resulted in the suppression of dissenting opinions which challenge the views of these governing bodies.

This was evident in the Essendon supplement saga, where Hird’s voice was stifled in order to protect the AFL’s brand.

However, it was most markedly evident in FIFA’s prolonged smear campaign against investigative journalists, such as Andrew Jennings, who took on the organisation and uncovered its corrupt underbelly.

Let’s make 2016, the year in which we, the mug fans, reclaim sport from these corporate shonks and mobsters.

They have corrupted our favourite pastime for far too long.