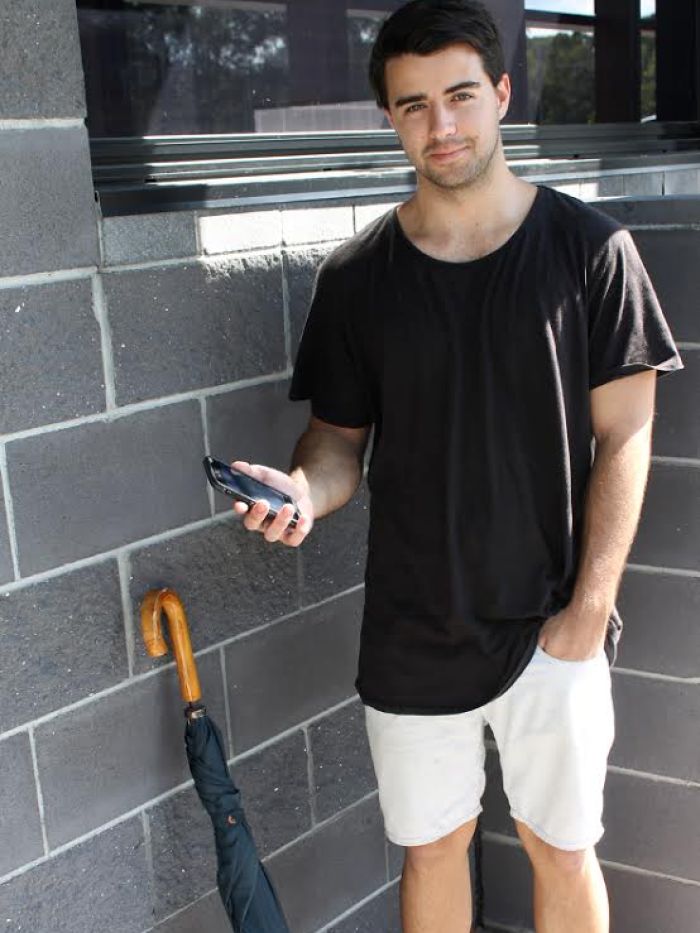 Jordan Andrews will never look at his mobile phone the same way again.

The University of the Sunshine Coast engineering student is still wringing out his clothes after spending parts of the past six months standing outside in the pouring rain, armed only with his smartphone to record rainfall.

It was all in the name of mapping comprehensive rainfall data to help with future weather predictions.

The Mooloolaba man used the phone's slow-motion camera to record falling raindrops, extract the audio and measure the intensity of the rain.

His new method of tracking rainfall could throw out the old, rain-gauge-on-the-fence method, for a more precise way to record rainfall.

The overall aim is to design a modern software application for mobile use, where the user will be able to use their handheld device in the rain, measure the intensity and location of the event and instantaneously upload the recorded data to the internet.

Mr Andrews' seemingly simple discovery caught the eye of some of the best in the world of water engineers, after he claimed top spot at the recent Engineers Australia 2015 Michael Woodhouse Undergraduate Awards.

Recording rainfall intensity using a phone and a container

When Mr Andrews first decided to track rainfall using sound frequencies, he knew it could be a matter of trial and error.

At first, he lay his phone ? tucked safely inside a waterproof case? outside to allow the raindrops to fall on the device.

But that method proved unsuccessful.

"I found the phone needed at least a 15-millimetre gap of water on the phone case to penetrate through and reverberate the sound," Mr Andrews said.

"All I got with that method was a dull thud."

Mr Andrews moved to completely submerging his phone in water and allowing the raindrops to fall into the water and the sound to reverberate in the container.

The raindrops were recorded falling into the bucket. After a dash outside in the rain to retrieve his phone, he extracted the audio from his recording.

The rainfall was recorded in millimetres per hour.

He said the outdoor rain gauge ? or pluviometer as it is known? was outdated and unreliable.

"There is so much influencing it, like wind," he said.

"You also need people to monitor them so it comes with all sorts of inaccuracies.

"This is something that could be used across all of Australia and is easily reproduced. So we could have so much more data in the future which will enable weather predictions from that data.

"I spent a lot of time out in the rain, in the middle of the night and the day, but it was definitely worth it."

Mr Andrews said the project aimed to create long-term and more-widespread records of rainfall events to contribute to research and action on issues such as climate change and flooding.

"You need a strong base of data to make predictions off, so having widespread data makes for accurate predictions for flood mapping, flooding and rainfall intensity," Mr Andrews said.

As technology improved, Mr Andrews said the new rainfall data tracking could be modified, as the phone had a pressure-sensitive screen.

Mr Andrews, who is due to finish his honours degree in civil engineering in a few weeks, hoped to finish developing a smartphone app to allow people throughout the country to contribute to the rainfall intensity data pool.