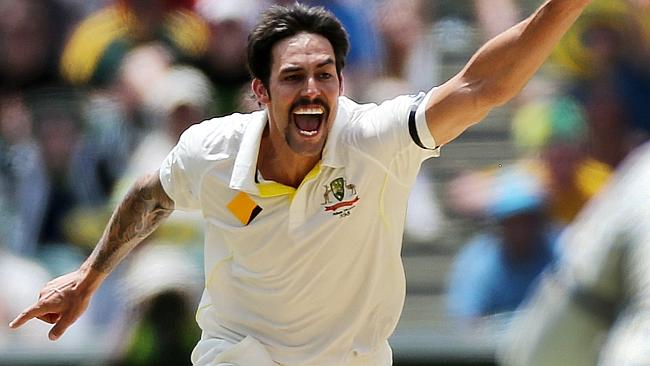 Australian fast bowler Mitchell Johnson will retire from all forms of international cricket after today's conclusion to the second Test against New Zealand at the WACA.

The announcement was made in a statement by Cricket Australia on Tuesday morning before the start of day five.

Speculation had mounted since the pace bowler's statement last week that he pondered retirement "most days".

I've given the decision a lot of thought. Beyond this match, I'm just not sure that I can continue competing consistently at the level required to wear the Baggy Green.

Last month the 34-year-old Johnson said that he had weighed up retirement after Australia's last Ashes series in the northern summer, where he had taken 15 wickets at an average of 34.93.

Johnson told his team-mates of his decision on Monday night, before revealing it to the public.

"I feel now is the best time to say goodbye," he said in the statement.

"I have been lucky enough to have had a wonderful career and enjoyed every moment of playing for my country. It's been an incredible ride.

"But the ride has to come to an end at some point and to do so here at the WACA is very special.

"I've given the decision a lot of thought. Beyond this match, I'm just not sure that I can continue competing consistently at the level required to wear the Baggy Green."

In the wake of his announcement, some of Johnson's former Australian team-mates, including Shane Watson and Ryan Harris, posted on Twitter in acknowledgment of his international career.

A native of Townsville in north Queensland, Johnson made his Test debut for Australia in 2007, in a two-match series against Sri Lanka.

At his best, Johnson's left-arm pace deliveries - in particular his sharp bouncers - proved all but unplayable for opposing batsmen.

Against England and South Africa in successive series in 2013-14, he had combined figures of 59 wickets at an average of 15.23.

He had match figures of 4 for 163 in Australia's first Test win over New Zealand at the Gabba.

In Perth, Johnson finished with relatively poor figures of 1 for 128 in New Zealand's first-innings of 624, but his dismissal of Doug Bracewell made him Australia's fourth-highest Test wicket-taker with 311.

Johnson is playing his 73rd Test, and could add to his career wicket haul if New Zealand bats at some point on the final day at the WACA.

His limited overs record was also strong, with 239 wickets in ODIs at an average of 25.26.

In March this year, Johnson took 3 for 30 off nine overs in Australia's seven-wicket win over New Zealand in the World Cup final at the MCG.