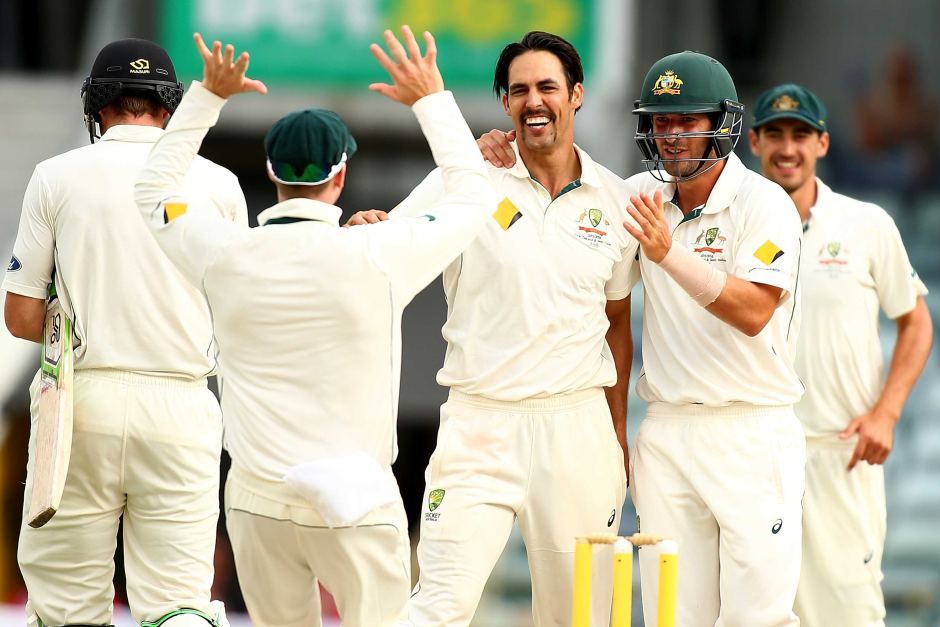 In the end the focus was less on the match than on Mitchell Johnson, as one of Australia's greatest fast bowlers announced his retirement from international cricket a few hours before the second Test against New Zealand petered out into a draw.

In front of a sparse crowd under floodlights on a cool and grey Perth afternoon: it was not an end that looked anything like the highlight reels of Johnson's glory days that looped incessantly on television monitors and computer screens.

A lack of adventure from Australian captain Steve Smith, who held back his declaration until 7 for 385, meant that the final chapter of Johnson's career ended with more whimper than bang.

Smith set New Zealand an unnecessarily high 321 in 48 overs on a pitch that was starting to crack up, leaving the crowd to celebrate two final Johnson wickets that were more ceremonial than anything else, as the match was abandoned with New Zealand on 2 for 104.

Once Smith was dismissed in the sixth over of the day, nicking an attempted forcing shot from a Trent Boult delivery that pitched short and moved away, the prospect of Australia briskly setting a target receded.

A combination of tight New Zealand bowling and a lack of intent from Australia meant that the game began to drift.

Mitchell Marsh came and went quickly, lbw to Doug Bracewell for 1, at which point the overnight centurion Adam Voges and wicketkeeper Peter Nevill embarked on a go-slow.

By the time Voges was lbw to Tim Southee in the 23rd over of the morning, Australia had added only 36 runs. It was not like it needed to worry: it had begun the day nearly 200 in front, and the cracks in the pitch were now starting to make the odd ball jag sideways or shoot along the turf to the wicketkeeper.

But the crowd gave Johnson a mighty ovation to the wicket for his final Test innings with the bat, and the New Zealanders gave him a guard of honour. He let no one down, with five boundaries in his own classic style either side of lunch before top-edging a pull from Southee for 29.

But it wasn't just hitting out: Smith left Johnson and Nevill out there for nearly an hour as the life was sucked out of the game. They carried on after Nevill nicked Southee for 35, and while Starc hit a six and a last couple of fours, and finally declared far too late in the piece.

Martin Guptill and Tom Latham might have thought of having a dash at the target when they took three boundaries from Starc's third over, but any last hope for a result was washed away by 90 minutes of rain.

It cleared for Johnson to remove both openers with classic bouncers, Latham top-edging a hook to Josh Hazlewood at long leg, before Guptill fended a throat ball to Joe Burns at short leg.

It was the last real excitement of the match, as Kane Williamson and Ross Taylor settled in exactly where their massive first-innings partnership left off. They rattled off a string of boundaries and ended unbeaten on respective scores of 32 and 36, before bad light forced an early handshake.

That just left Johnson to doff his cap to all and sundry, as he was cheered off by the crowd and chaired off by his fellow members of the fast-bowling cartel.

If the end was a bit of anticlimax, the career that preceded it had more than compensated.

And as Johnson said, he finished on his own terms, with his wife and daughter there to embrace him, and his friends to surround him.

As far as cricket careers go, that's a very good way to go out.