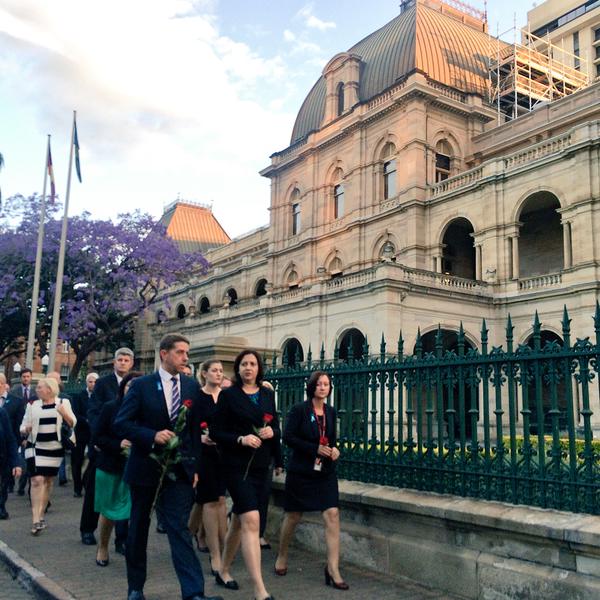 Victims of domestic violence will no longer have to face their alleged attacker in court under laws passed in Queensland.

"Imagine the bravery it takes to stand up to a violent partner, only to find you have to give evidence in front of them in court," she said.

An independent Family and Domestic Violence Death and Advisory Review Board will be established to identify systemic issues in delivering domestic and family violence services.

Furthermore, Attorney-General Yvette D'Ath said there would be specific notes on a person's criminal history for domestic violence-related offending.

"The legislation will ensure domestic violence-related offences can be recorded by the court to reveal repeated family violence offending," she said.

"This will help our judges and magistrates to become aware of repeat or problem behaviour before it escalates."

Parliament rose early on Thursday so MPs could take part in the "Enough is Enough" rally.

Politicians from both sides carried red roses as they walked from Parliament to a square in Brisbane's CBD.

"We hold red rose rallies every time a person dies in Queensland," she said.

"But this is just a more prominent version of it and the purpose is to show respect, frustration and a wanting, a desire to do something about it."

The Queensland Government is implementing all recommendations in the Not Now, Not Ever report handed down earlier this year.