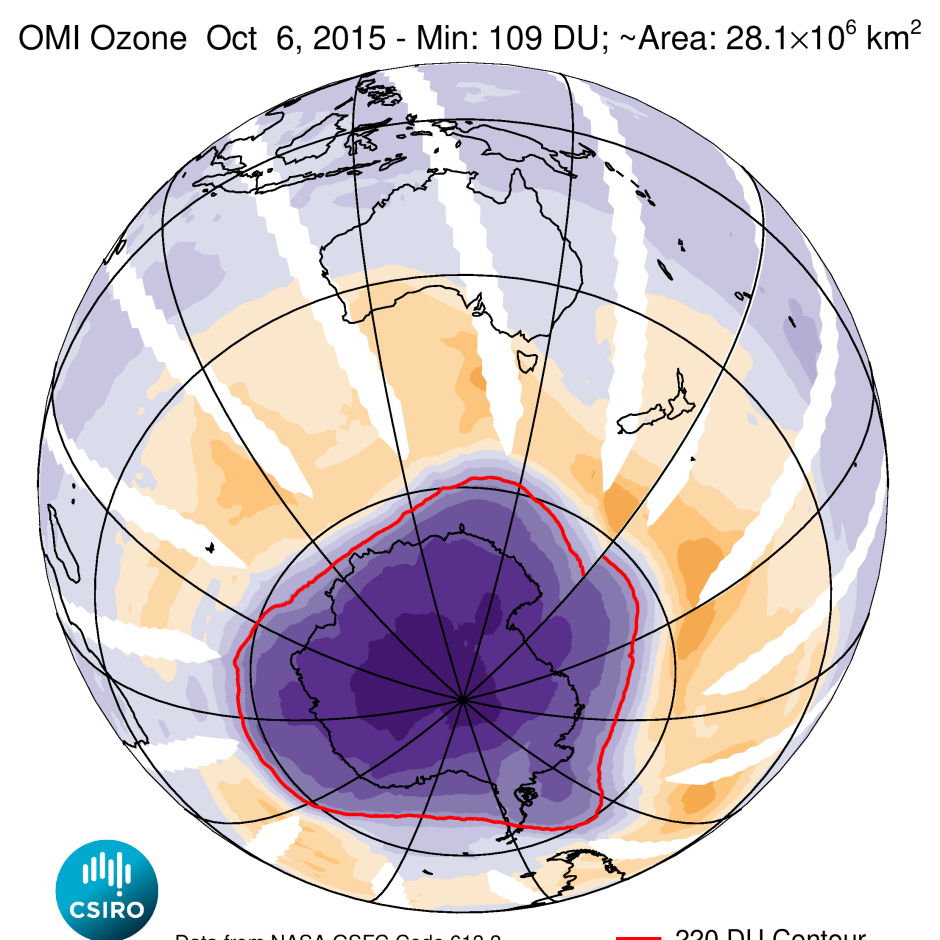 The hole in the ozone layer over Antarctica has expanded to near-record levels this year, covering an area almost four times the size of Australia.

Scientists from the UN said the increase was due to colder-than-usual temperatures, rather than any extra damage being done to the Earth's protective layer.

But that could still mean extra UV radiation and the risk of more people getting sunburnt in Australia's southern states this summer.

The hole in the ozone layer above Antarctica has been carefully monitored for over 30 years.

According to atmospheric scientist Professor David Karoly from the University of Melbourne, its size fluctuates greatly when it emerges each spring.

"Each springtime over the last now nearly 35 years, there's been a depletion of stratospheric ozone over Antarctica primarily due to two really important factors," he said.

"It's the increase in ozone-depleting chemicals in the atmosphere and a very special cold conditions that occur in winter and spring over Antarctica which provide a special, if you like, catalytic ozone destruction vessel that allows the ozone to be rapidly deployed by the higher concentrations of chlorofluorocarbons ? ozone-depleting chemicals that have occurred in the stratosphere due to human activity."

The UN's weather and climate agency said this year's seasonal ozone hole peaked on October 2, covering an area over Antarctica of 28.2 million square kilometres ? close to four times the size of Australia or the size of Russia and Canada combined.

The CSIRO's Paul Krummel said it was a big difference compared to last year, when the seasonal ozone hole was one of the smallest on record.

"The past couple of years have actually been quite small ozone holes but this year it is certainly quite large and for this time of year it is one of the largest or is the largest on record but in terms of overall area compared to previous years, it's about the third or fourth-largest."

Mr Krummel said the size of this year's ozone hole was caused by unseasonably cold temperatures, rather than any additional damage to the ozone layer.

"What really determines the size of the ozone hole each year is really the meteorological conditions and this year it is extremely cold over the Antarctic and by this time of year normally warm air is starting to egress into that area and this hasn't happened yet," he said.

Mr Krummel said people should not be concerned by the meteorological variability, and noted that it occurs each year.

"We do know that the substances that cause the ozone hole, the chlorines and bromines up there are decreasing ... have decreased by about 18 per cent since their peak in the late 1990s, early 2000s," he said.

Since 1987, gases known to cause ozone depletion have been banned and last year the World Meteorological Organisation reported the first positive signs of "ozone recovery".

Professor David Karoly from the University of Melbourne said this fluctuation in size was not a long-term concern.

"It makes it harder to then see the long-term improvement, the declining trend in the size of the ozone hole but that is still expected to continue," he said.

"We expect in the southern hemisphere that the ozone hole will not completely recover for another 40 to 60 years, when it recovers back to pre-1980 levels when the ozone hole was first discovered

However, this year's ozone hole size does have the potential to affect Australians.

"Once the ozone hole does start to break up, air that's depleted in ozone may be transported over to the southern parts of Australia which can, of course, during those periods increase the amount of UV radiation which in the Earth's surface," Mr Krummel said.

"So there could be a tendency for a bit more sunburn.

"I would say mostly the southern states is where it is likely to impact.

"This typically happens in December so just as the sun is getting hotter and higher in the sky, this is when it is likely to occur and then by January, February, it's probably dissipated."

Both scientists said vigilant use of sunscreen and sun-protective clothing was recommended throughout the Australian summer.