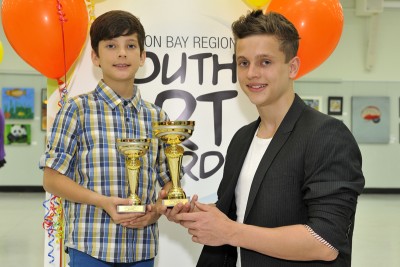 Clear Mountains Oliver Armstrong is going places with his art.

The Genesis Christian College won first prize in the Junior High school category of the Moreton Bay Youth Art Awards, for students in Years 8 to 10, with his artwork entitled My Minds Eye.

Toby, Oliver and other aspiring young artists have been officially recognised for their creative prowess with Moreton Bay Youth Art Awards.

Moreton Bay Deputy Mayor Mike Charlton presented the awards at a function at the Strathpine Community Centre on 16 October.

Every year the high standard of work presented by these young artists continues to impress, Cr Charlton said.

Its great to see so many colourful, thought-provoking and creative pieces being produced by students in our region.

This year we had more than 300 entries from almost every corner of the Moreton Bay Region.

The competition is open to school-age residents of the Moreton Bay region or children who attend schools in the area.

Closeburn local Oscar Dash won best two-dimensional artwork for students in Years 4 to 7, with his entry Lest We Forget.

The collaborative prizes consist of a $1000 scholarship to be spent on art workshops for the winning schools.

A total of $4600 was awarded to art awards winners, including $200 prizes for winning submissions in two-dimensional and three-dimensional categories for each of the four age groups.

The winning artworks are on display at the Pine Rivers Art Gallery, at Gympie Road, Strathpine until 25 October.

The works can be viewed between 3pm and 6pm on weekdays and from 10am to 4pm on Saturday.