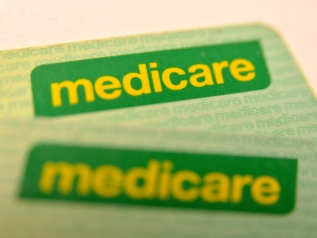 New evidence has emerged showing that a sophisticated Medicare scam that involves stealing people's identities and setting up bogus bank accounts is operating in at least three states.

One Labor senator has called on the Government to do more to investigate the issue, which he says is evidently being run across three states and territories.

New South Wales Police are investigating the theft of personal details from Medicare records and now an identical scam has emerged in the Northern Territory.

Darwin doctor Sam Heard discovered his personal details had been stolen and a false bank account set up in his name soon after he visited the Royal Darwin Hospital's emergency department on September 19.

It was the first time he had used his Medicare card in almost 10 years.

"I was dealt with fairly quickly in the middle of the night, and then headed off home and I haven't been back since. So I just had the one contact," Dr Heard said.

Three weeks later he received a letter from Medicare.

When he studied the letter from Medicare further, Dr Heard discovered the payment was for a service he had never had, purportedly performed by a doctor in Queensland he had never been to.

"I thought, 'oh perhaps this means the money is going into his bank account and it's a mistake, they've paid the wrong patient'," he said.

Dr Heard called the Medicare fraud line and discussed the false payment but has not heard from Medicare since.

Within weeks, a Commonwealth Bank debit card in Dr Heard's name arrived at his home address, despite the fact he had not opened a new account.

He checked with the Commonwealth Bank, where he has been a customer for 20 years.

"The bank account was in my name, my date of birth and my full address had been used," he said.

Bank staff confirmed money had already been paid into the account.

"I said: 'Would it be this amount from Medicare?' And she said yes," Dr Heard said.

The fraudulent payment had already been withdrawn from the account.

Victims in NSW have reported up to nine false bank accounts being opened in their names using personal details taken from their Medicare records.

This seemed slick. If somebody could go online and had a way of making a bank account and making a claim to Medicare that generated this payment, why wouldn't they be doing that all over the shop?

The Department of Human Services told a Senate committee a total of $30,550 had been identified in debts arising from the scam.

There were 369 cases of potential identity theft from Medicare records in the two years to June 2015.

The department cut the limit for online Medicare claims to $150 a month in the first quarter of this year.

Dr Heard said he was certain he was not the first person outside New South Wales to be affected by the scam.

"This seemed slick. If somebody could go online and had a way of making a bank account and making a claim to Medicare that generated this payment, why wouldn't they be doing that all over the shop?" he said.

"So it seemed to me very likely that this is common."

Dr Heard said he was also concerned at the apparent lack of security checks by the Commonwealth Bank.

"I asked for some assurance, about how could they do that set-up when I already had an account with that name, date of birth and address? How could they set up another one without at least contacting me, and they said really nothing, they didn't have an answer for that," he said.

Labor senator and the party's spokesman for human services Doug Cameron is pursuing the scam and the Department of Human Services over the alleged theft of Medicare clients' personal details.

He said new evidence suggesting the scam was being run across at least three states and territories aligned with the information whistleblowers and the public had given his office.

"The information I have is that this is a national problem," Senator Cameron said.

But a joint response from the Department of Human Services and the NSW Police continues to suggest the scam is restricted to NSW.

"This is an active investigation into the alleged theft of patient and clinical records from medical practises," a spokeswoman for the department told the ABC.

"As a member of Strikeforce BOARD, the department is actively investigating with the NSW Police whether there are any connections with Medicare claiming."